I pulled up the seat pan and tweaked the pilot’s roll push rod by 1 full turn to straighten up the stick.  Later flight test showed that to work very well.

Looked at the pitch servo while I was under there and confirmed that there was good power to the servo with the appropriate switches on the panel.  Damn.  That was the easy fix I had been looking for. I pulled the servo and took a closer look, not really knowing what to look for.  Upon closer inspection, I realized that I had had a major brain malfunction when I did the wiring for the plug to the servo. Only the ground and power were in the proper position.  I’m amazed that I didn’t kill anything.  I pulled the wires, ordered replacement sockets and installed them a few days later.  On power up, I had the Dynon go through the system discovery routine and this time the pitch servo was recognized!

I turned off the autopilot and will not try it again until I pull the back panel and check out the pitch servo.  Since I wired them both on the same day, I’m pretty sure I messed that one up, too.

There were some problems installing the updated system software.  I couldn’t get the Dynon to recognize the package from Van’s.  Dynon tech support suggested a freshly reformatted memory stick and their distribution instead of Van’s distribution.  Uploaded just fine, so I’m now flying behind system 14.2.1.

My previous observations with bizarre winds aloft and inaccurate synthetic vision have a poorly calibrated magnetic heading as a common input.  I elected to not debug that any further until the system upgrade was done.  Having accomplished the upgrade, I did one more ground compass calibration and then an air confirmation calibration.   The installation manual wants to see a “quality” figure of at least 70, my unit reported Quality 120.  After that, winds aloft and synthetic vision are now much more believable and accurate, respectively.

gradually pushing out the envelope

This blog kind of died over the last few months. Looking back, I realize that I wrote about each page in my assembly instructions, since each page represented a clear goal.  Now that I’m flying, I have lost that clear framework, so I’m doing something a bit different.  From here forward, I’ll use the blog to document flights and maintenance on the plane.  I’ll spend a few entries getting synched with my personal log book and the aircraft logbook.  I’ll use the blog as my electronic backup to the formal ships log books (airframe, engine & prop.)

Attempted time-to-climb to 10K but had to abort due to high oil temps. Power off stall series; 3 each with no, half and full flaps. Sharp break to the right in all cases. Break speeds in high 30's, mid 30's and low 30's respectively. Good buffet and warning tones prior to breaks. Attempted power on stall, gave up with deck angle > 25 ° and heavy buffeting.

Noted that I was near Port Bucyrus, did some practice landings, including 2 on soft field. Returned to Delaware. Still noting apparant erroneous magnetic heading data, resulting in bizarre winds aloft depictions and mismatch between actual heading and synthetic vision displayed heading. Also had another episode of fuel level suddenly dropping to low (zero) values before eventually returning to normal.

While at Port Bucyrus, I landed on grass strip 09, turned & departed 27. Landed 27, turned & departed 09. Both sides of grass strip notable for having homes & trees off end of runways, thus needed to make slightly high approach and drop in. This gives long float before touching down.  I had the throttle full back and the engine died during the rollout on one landing.

I’ve been out of town for a few days, but was able get a quick flight in yesterday (in between two really heavy rain showers w/ occasional thunder & lighting.  I really like being able to see the weather and be able to make a quick, but safe, flight to confirm that the avionics really are confused about the heading vs. track.  I’ll have to re-calibarate the compass as my next step.) 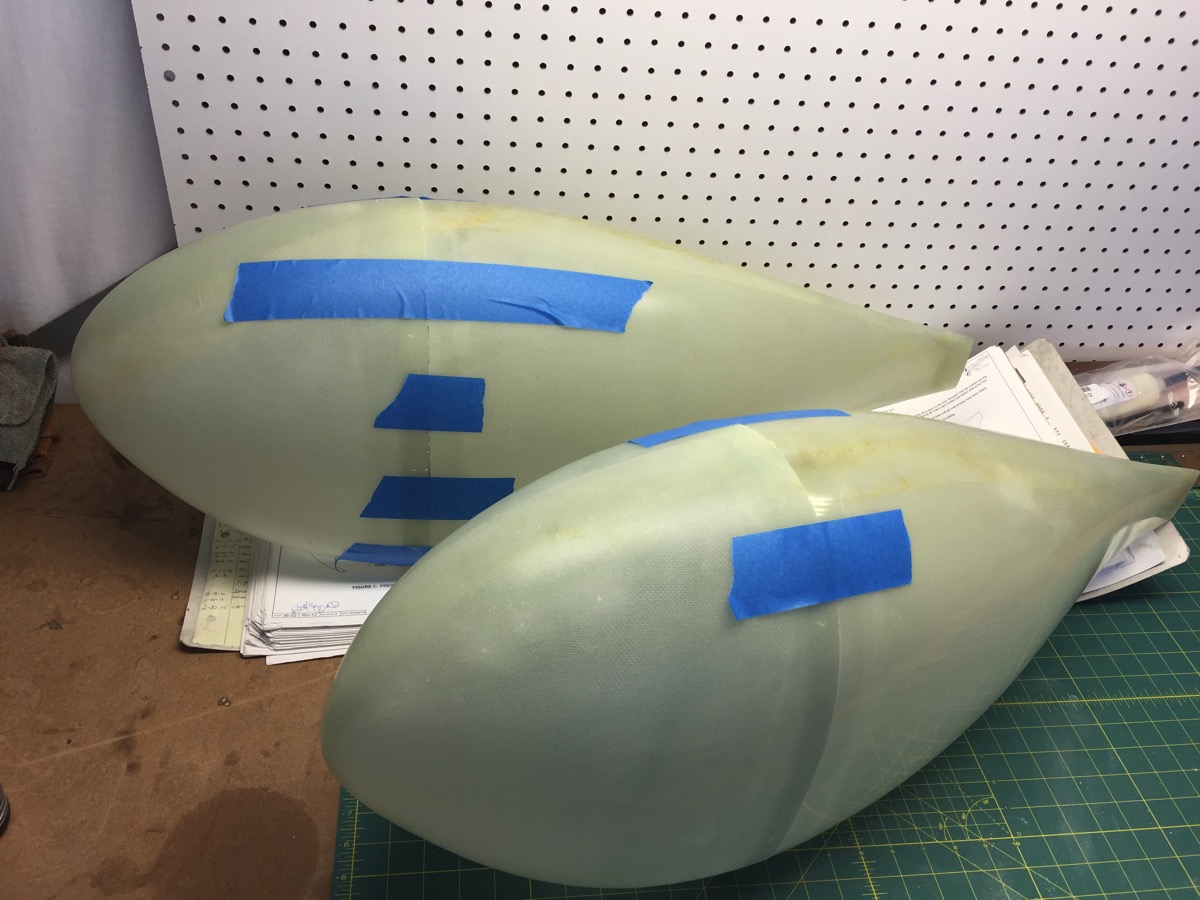 Alas, I didn’t read far enough ahead.  I dutifully fit the halves together, only to discover that the next step is to trim about 1/4” off of each front.  Lots more sanding to do!