Catching up, and going UP!

It’s been a good month since I’ve posted, but that’s because I’ve been flying (and working, but that’s another story.)

I did eventually get the canopy back on got back into the air on the 19th and did my 1st Cross Country!  DLZ weather was low fog until about 10:30.  Took off into a glorious CAVU.  About half way there, Fayette Co (I23) AWOS reported "300 broken"!   I diverted to London and set up for a landing.  Checked Fayette AWOS again after a touch&go and heard "300 scattered".  From 1000' at London, it looked totally clear towards Fayette with clouds to the east.  I pressed on and never saw a single cloud near me.  Uneventful landing, grabbed the courtesy car & had my meeting at the hospital.  Only fly in the ointment was that I couldn't establish radio contact with Columbus Departure due to too much noise on my transmissions.  The flight back was pretty uneventful and I played with the autopilot.

The stall indicator was inop on preflight, so I looked at it I after I got back to Delaware.  When I lifted the leading edge tab, I no longer heard/felt the microswitch click and deduced that when I pulled the wing I misaligned the switch when it was put into the sling and missed the cutout for the indicator.  It was pretty easy to pull the access panel and reposition the switch.  While I was there, I saw that I had pulled the AoA sensor line off of the little rivet stem that it connects to.  That went back on easily as well, but i’m debating using another fixture that has a longer stem so the line is not so touchy.  I’m glad I found it when I did, as the next flight was to calibrate the AoA system itself.

I went up to calibrate the AoA line and ended up making an altitude record for the plane.  Calibrating the AoA apparentely used to require multiple stalls.  Now, it involves 4 oscilations from +5° to -5°, and then 1 stall.  Piece of cake!  It seemed to track very well after calibration.  I decided to fly to 10K', but just kept going.  I thought about 14,000, but I needed to get home for dinner!   Unfortunately, I neglected to take any pictures.  My bad.

9-27-16  I had so much fun climbing the other day, that I wanted to do it again.  I was also a bit disappointed when I realized I had not taken a snapshot of the display, so that was just added incentive.  This time, I went for the legal max ceiling of 14,000'.   Winds were also part of the fun.  I checked the winds aloft and was glad I did--winds were ~50 to 60 kts from the west.  Had I not looked, I could have made my climb downwind and spent a long long time getting home!  It's a bit cool, but the heater did fairly well.  Above 10K, the amount of power produced was down quite a bit, and thus there wasn't that much heat to get out of the heater, but it was enough for me.  A passenger would not be as comfortable, as there is no heater on the right side.  Landing at Delaware was a challenge, but fun and certainly doable.  Winds variable 220-270 @ 11 G 21.

Take a look at the wind vector–60 kts!  Amazingly, it was very smooth above 4000’  I had just a touch of turbulence near the top of the climb, and it was a great flight.   Other fun items of notice:  The autopilot worked great on both axes.  I’m still having trouble figuring out how to have it acquire and hold an altitude, and it doesn’t auto-trim yet, but the navigation modes are easy to use.  I did get the vertical mode to hold airspeed and it did so very well.  You can see the AoA display to the right of the bottom of the airspeed tape.  Two green bars were consistently shown during the climb out; I did not see them move much with altitude, although the pitch of the plane did so.  Initially,I was climbing at 10° above the horizon to maintain the 77 KIAS / 2 Green Bars; you can see that I’m at 5° nose up as I reached my ceiling.  Coolant temps were at the bottom of the green (as mentioned above) and EGT’s do drop with altitude.  I think that the auto-leaning carburetors are running a bit rich at altitude.  I’ll talk with Steve Beaver (local hangar neighbor who appears to know everything, plus is a heck of a nice guy) about that.  He’s the only person I’ve come across who understands the Bing carbs. 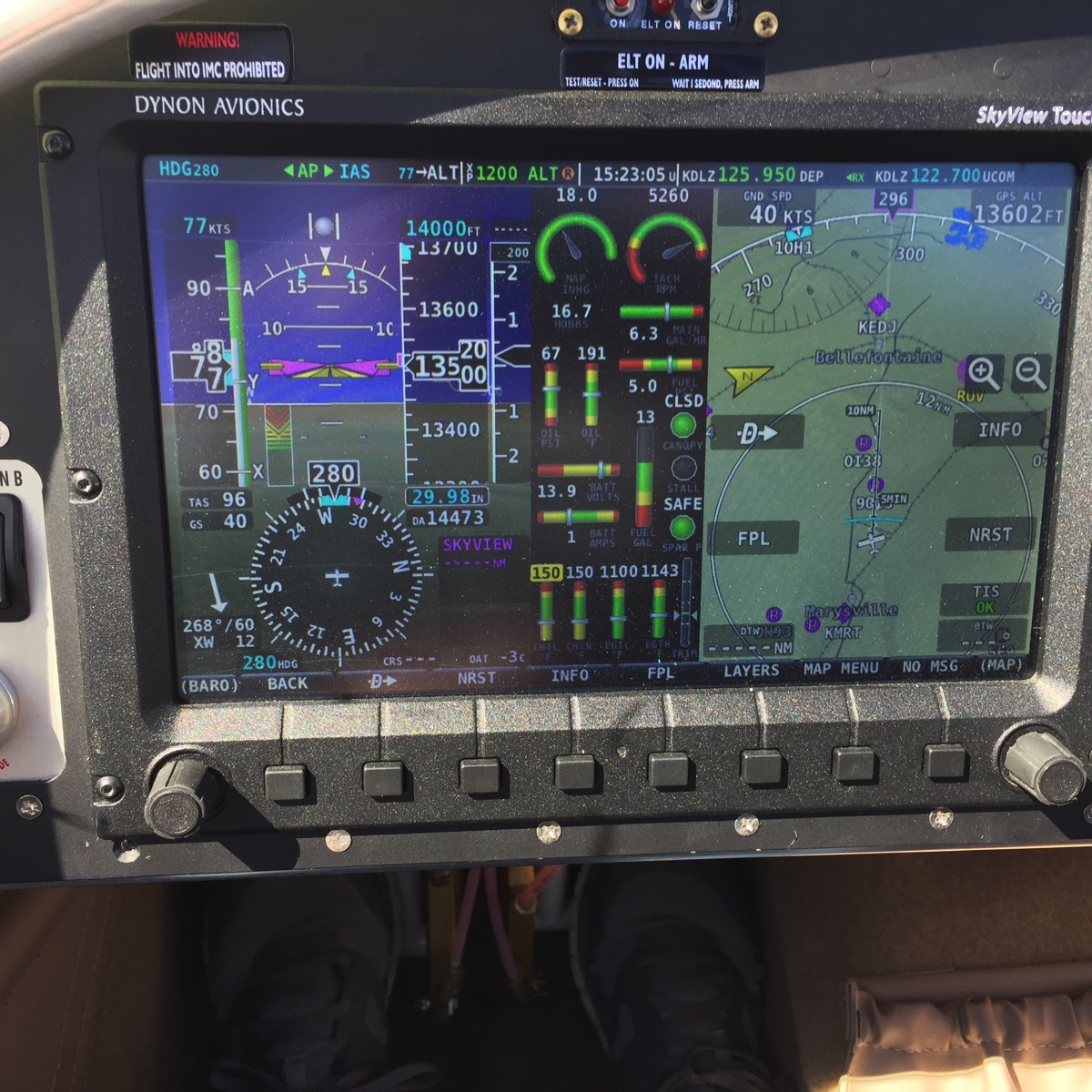 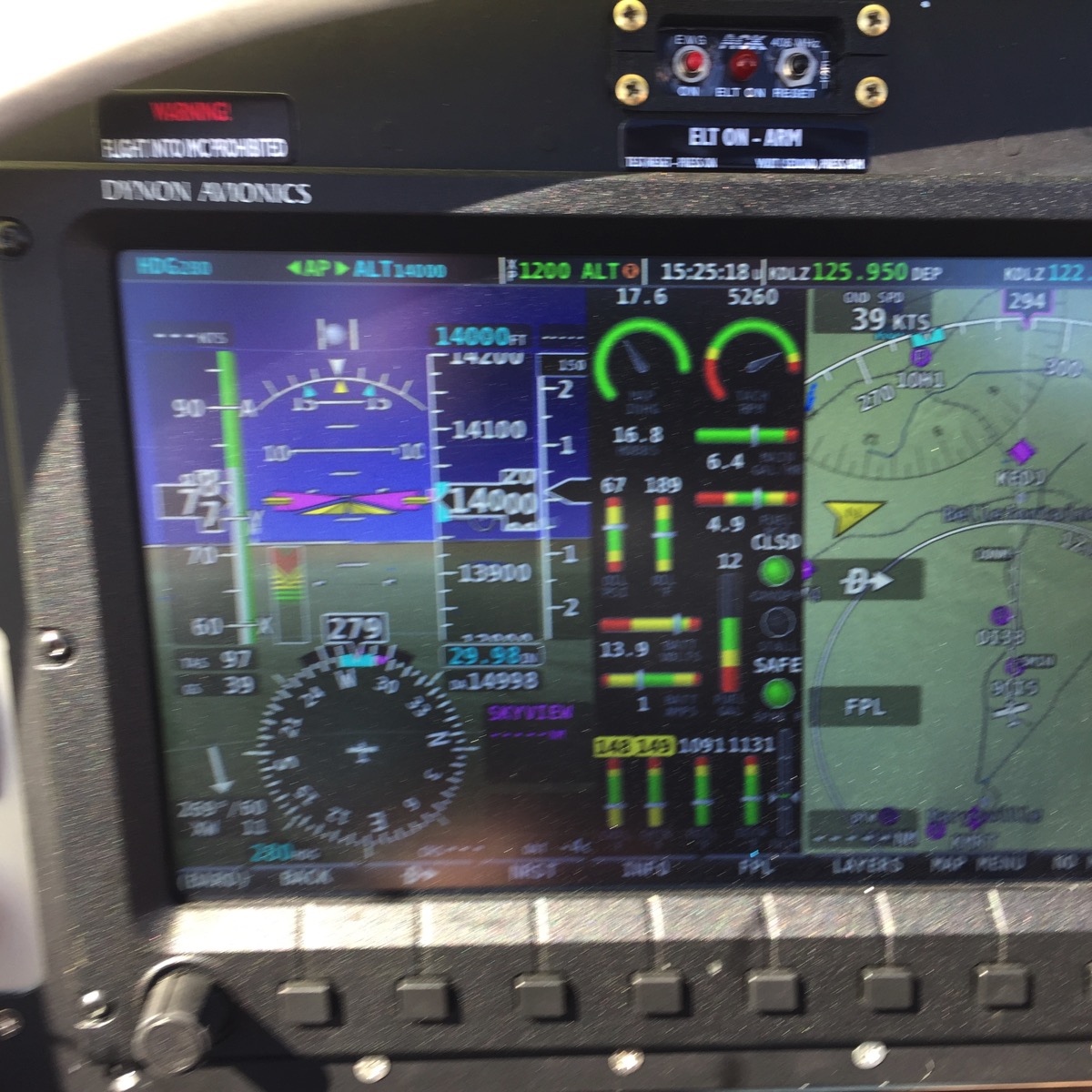