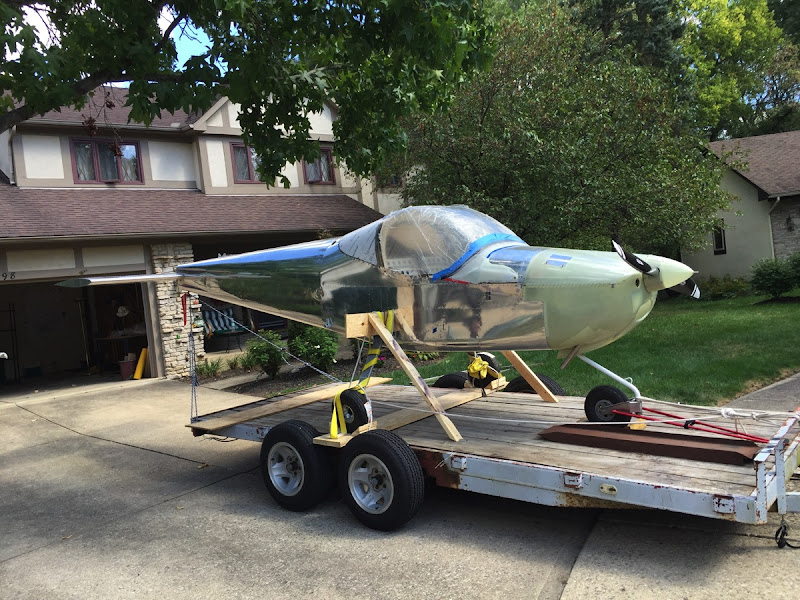 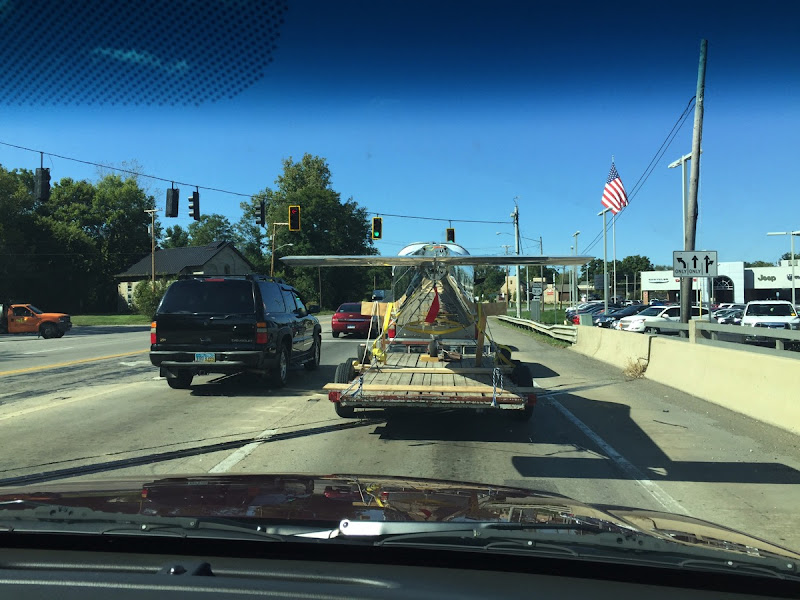 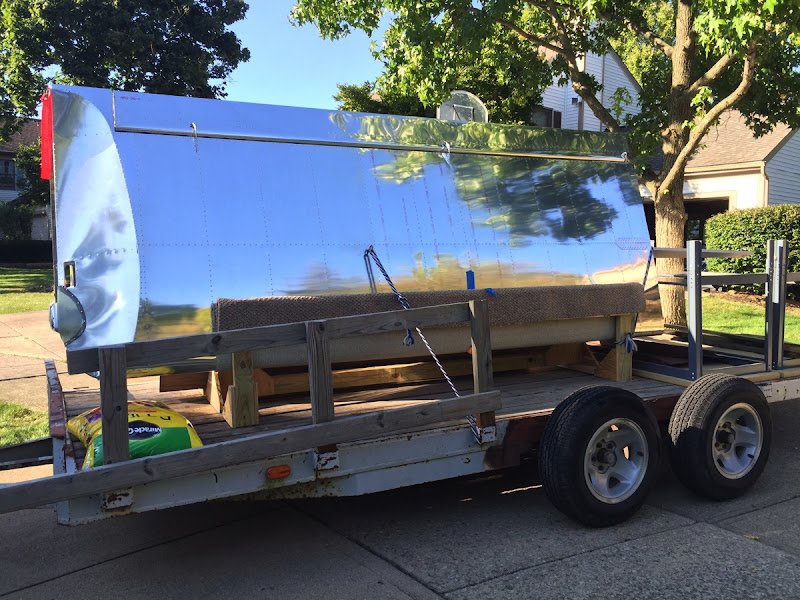 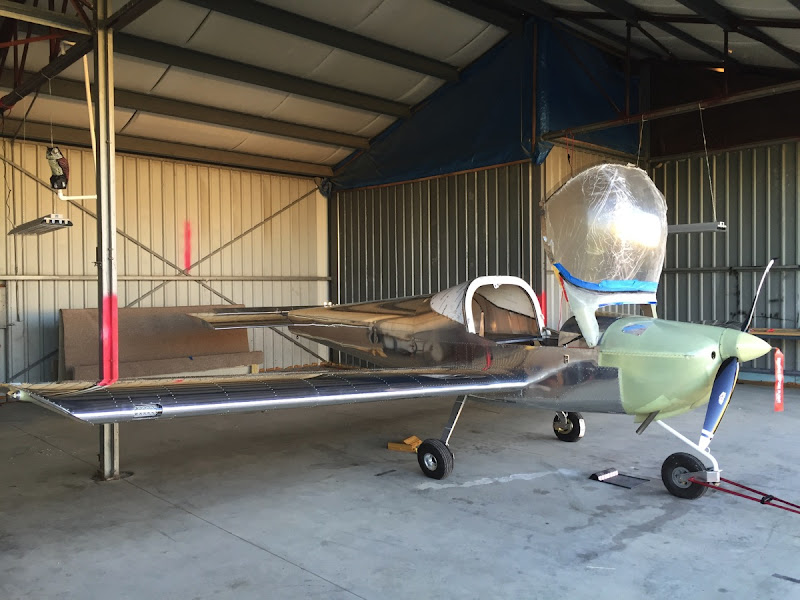 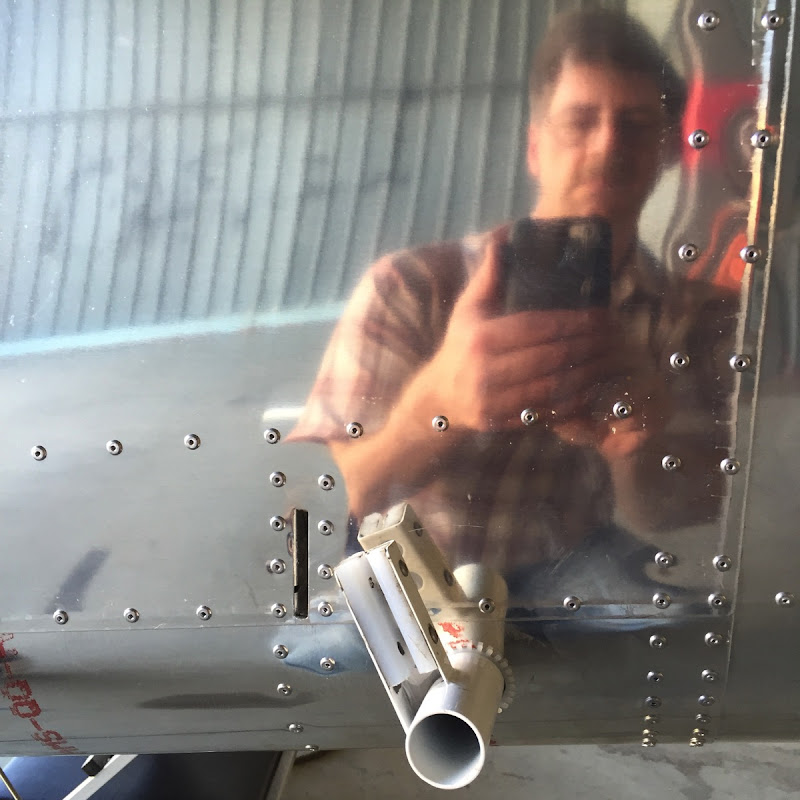 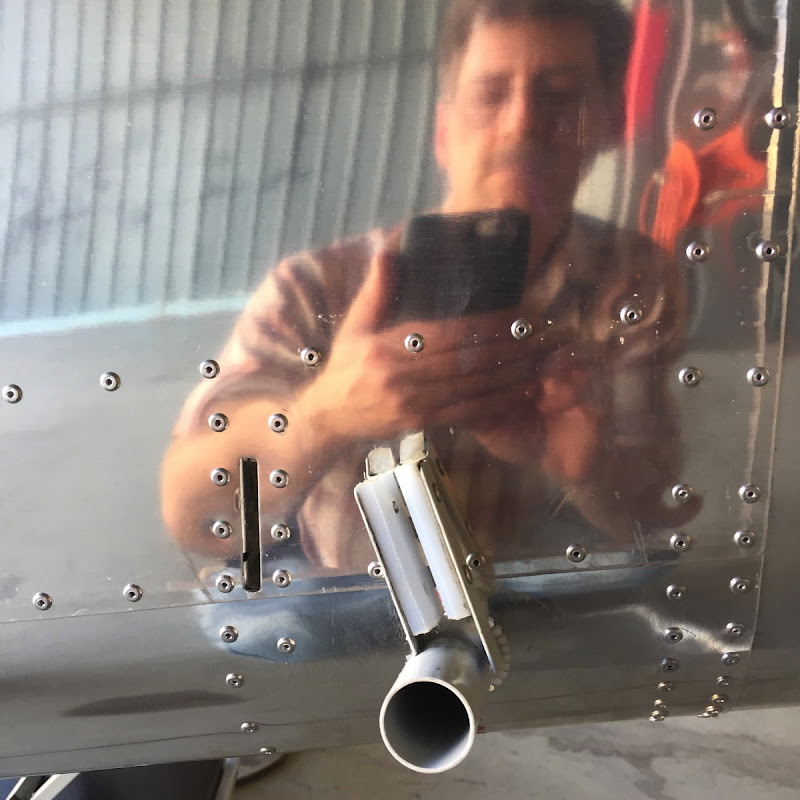 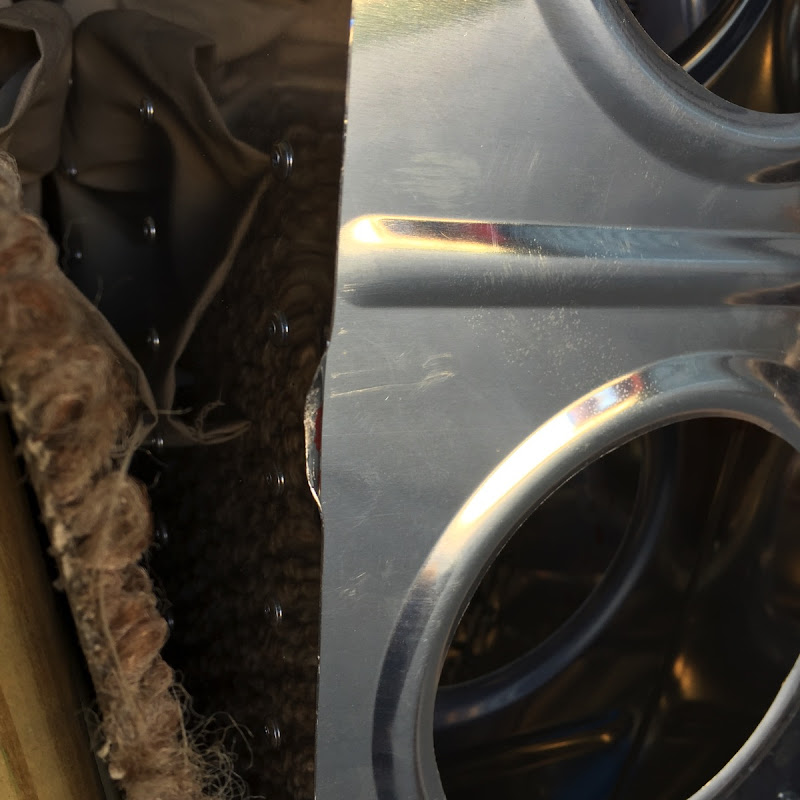 I purchased the optional interior packages (12 lbs.) and installed it today.    Since I’ll have to pull it off in a day or so, I only used a few screws for the  rear bulkhead.  It took about 3 hours of folding & trimming the carpet and putting down velcro, but Wow! what a difference!  The interior looks very nice as we approach the finish line!

I’m going to be out of service for the next week due to an insane work schedule.  I’m hoping to make myself get up early a couple of days and put in about an hour of work on the plane before heading to the hospital.  Hopefully the cables will arrive tomorrow or Tuesday.  It should take <2 hours to install them.

I also need to get some plywood and make dummy spars for tying the plane to the trailer and pack up the tools for transport.  Sigh.  This is such a short list compared to everything I’ve done so far, but it doesn’t feel that way. 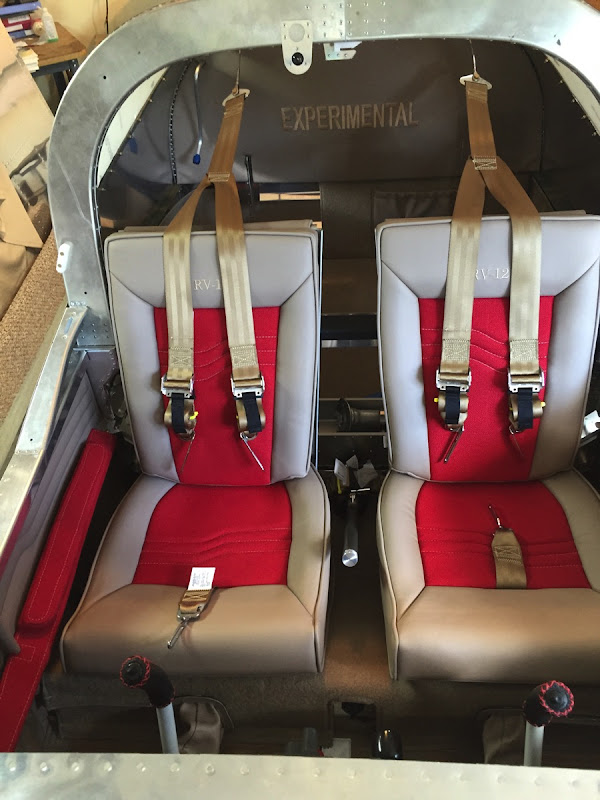 This was an anticlimactic pair of pages.  The process here is to pull the Skyview computer out and remove the screws holding the ignition module in place on the left panel.  This allows you to have access to the potentiometers inside the AV-5000A ‘magic box’ so the various audio levels can be adjusted.  The Book states that the potentiometers are pre-adjusted to such-and-such a value (number of turns), but that I am to fiddle with them to get certain audio characteristics.    Turns out that the factory settings were just right and no adjustments were needed.  Everything got put back.  No photos taken.

I hate paying taxes.  I hate working with ProSeal.  I did both yesterday.  (Taxes have to be paid quarterly according to my accountant.)

As you may recall, I got the rear window placed the other day with the help of my son.  Yesterday, I tackled the final step of using ProSeal to achieve the required isolation from any possible fuel spill which will craze the material.

I elected to use the large tube of ProSeal that is dispensed with a caulking gun because (1) I had purchased one earlier, not realizing its size and (2) the nozzle would be much better for squirting in between the edge of the window and the turtle deck.  Unfortunately, about 25 % of the way around the window, I realized that I wasn’t getting any material out of the nozzle, no matter how hard I squeezed.  Turns out the internal seal had failed, probably because the tip got gummed up, and all of my ProSeal had leaked around the seal and completely gooped up the piston from my gun.  Since I had already started, I cursed and got creative.  The second photo shows the result:  I used a large exacto knife to slice open the canister, scooped out about 30 ml of ProSeal and put it into a medical syringe.  A quick chop-chop with diagonal cutters removed much of the collar (Luer Lock) from the syringe, and I got back to work.  All in all, not too bad.

If I build another RV-12, here’s how I’ll do this step next time.  Insert window, as per The Book.  Insert all screws and start them (finger tight) with the washer and lock nut.  Apply the electrical tape per The Book, but don’t bother to put cut outs or lifts so you can get to the screw heads.  Squirt the ProSeal.   Have your assistant tighten the nuts from the inside while you hold the screws stationary with a screwdriver applied through the flexible electrical tape.  This will force out all of the extra ProSeal.  Remove the excess with the popsicle stick as per The Book, and remove the tape for clean up.  Remove each nut & screw on the right side, add ProSeal, re-insert and re-tighten.  I think this will cut down on the mess and contamination. 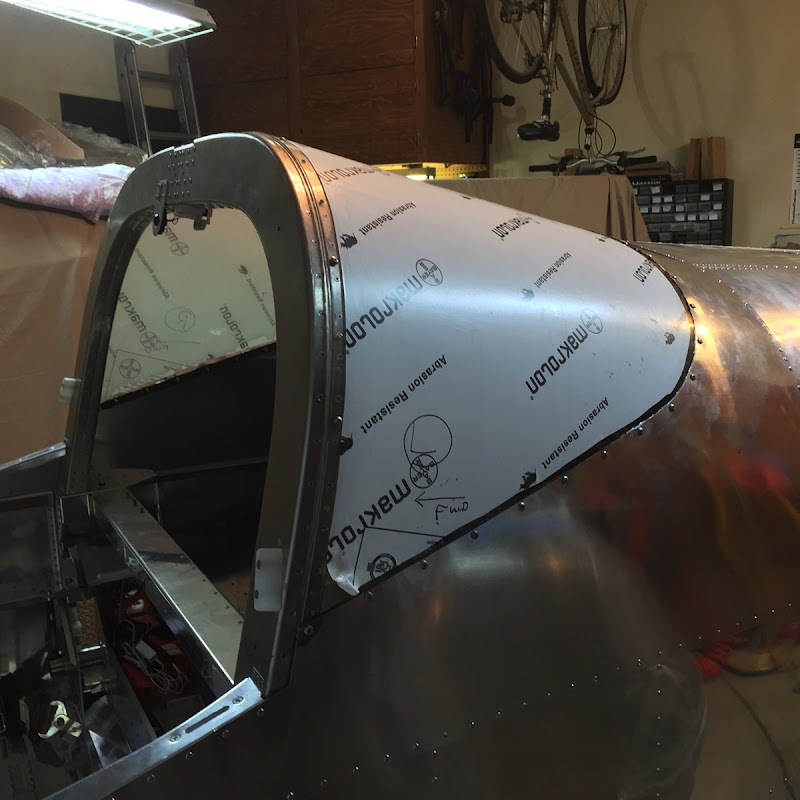 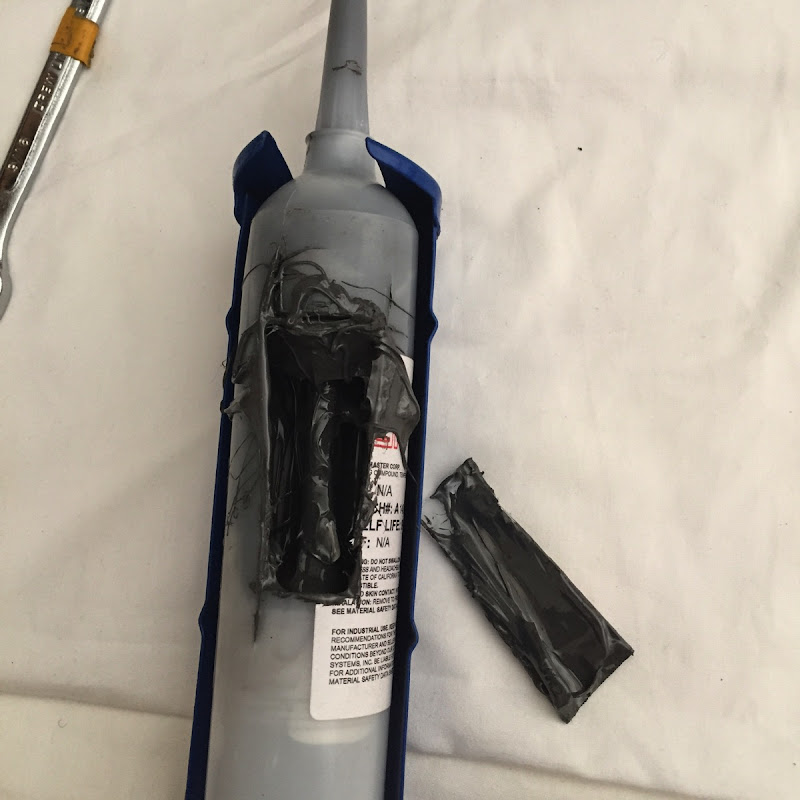 Getting the trim motor connected wasn’t too bad.  I double and triple and quadruple checked the white wires to ensure that I was trimming in the proper direction. I then used the Product Acceptance Procedure to further verify that all linkages and trim directions were as directed.  I was then disappointed to discover that the trim position indicator wasn’t working.  Rummaging around in the VAF, I found the hidden menu item to do a calibration for the trim position indicator and I thought my problems were solved.  Alas, it was not to be the case.  Running through the calibration screen, the computer dutifully noted that the voltage on the sense pin remained about 5 v the entire range of operation.

Yesterday, I tackled that problem.  The biggest issue is that I am 55 yrs old and have had to wear trifocals for over 20 yrs now.  Sitting on a stool under the tail of the plane requires looking up to see the trim motor and its various wires.  That means that I’m looking through the ‘distance’ portion of my lenses and that everything is hopelessly  out of focus.  Did you recall that I’m 55?  That means I can’t crane my neck back far enough to get the ‘near’ sense to bear.  (BTW, it is possible to order “mechanics” glasses that have the ‘near’ lens ground at both the bottom and the top of the lens.  Unfortunately, they run about $500, and no, you can’t get trifocals in that arrangement.)

Eventually I was able to find a stool of the proper height, an acceptable head angle and sufficiently bright light source that allowed me to find a bent pin that wasn’t making contact.  In the process of trying to strip the wire for a new micro connector, I promptly ruined 2 “ by tearing through the soft insulation.  Sigh.  I soldered an extending replacement, heat shrinked (shrunk) insulation over it and eventually got everything reassembled.

Back to the cockpit, powered up, found the magic screen and did the routine.  This time the voltage on the sensed line obediently changed with position, and viola!, another bug taken care of.  On to the rear windshield! 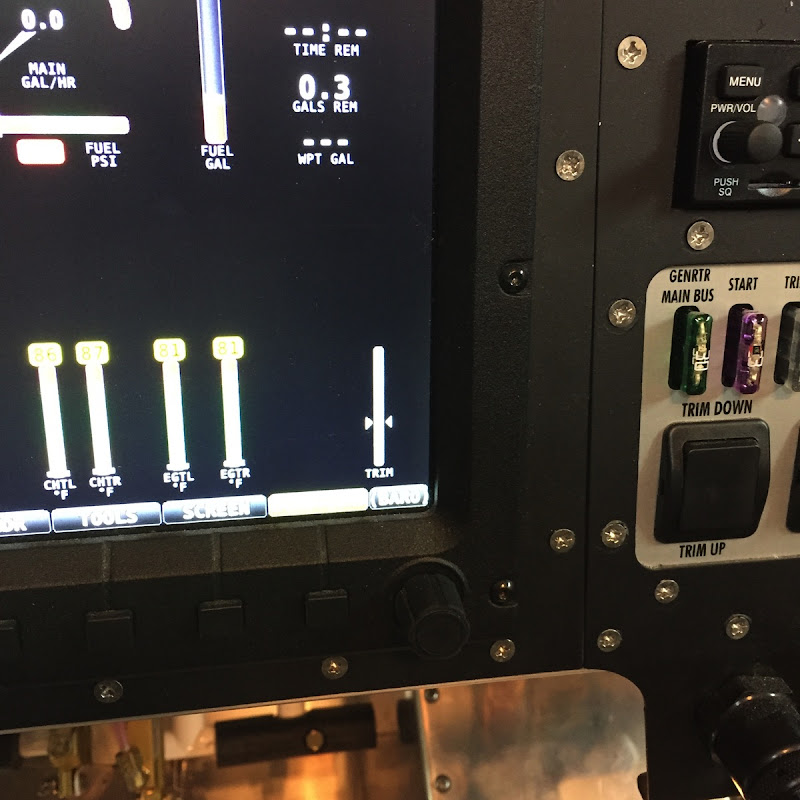 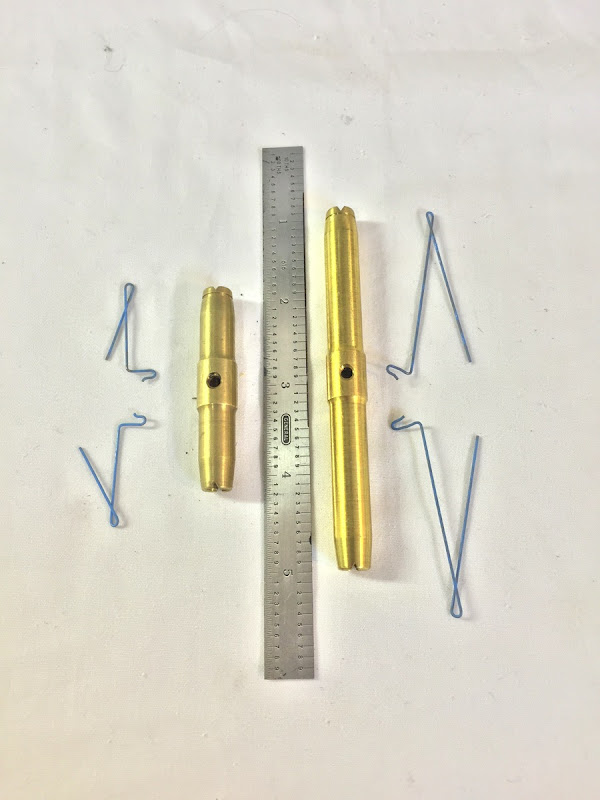