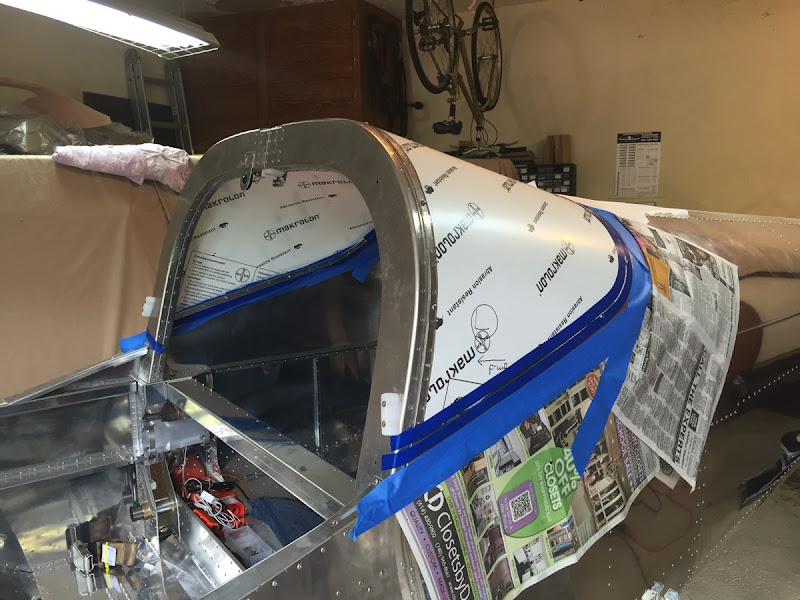 Well, i’ve had a hell of a time with the stabilator cables, and this is just a status report.  (in other words, not solved yet.)

long story short:, I think the cables are too short.  Posting to VAF resulted in several good suggestions.  Key among them was the observation from an EAA Tech Counselor that I had problems with running the cables in the correct holes last month, and he recommended that I double/triple check that the routing is correct. Unfortunately, I believe that it is.

I spent hours (2 or 3) try to ensure that I was looking at the correct cable and not get confused with the running.  I eventually did the following:  the rudder cable was disconnected from the tail region and brought forward so that the protective sleeve was clearly visible.  This served as positive ID of the rudder cable.  BTW, the rudder cable runs from the lowest to the highest hole as it moves aft.  (Just thought you’d want to know.)     Next I detached the upper/right cable from the turnbuckle and pulled it all the way back to the pulley.  I put a metal rod (from surplus piano hinge) through the resulting empty hole to identify it as hole/cable associated with the upper stabilator horn. 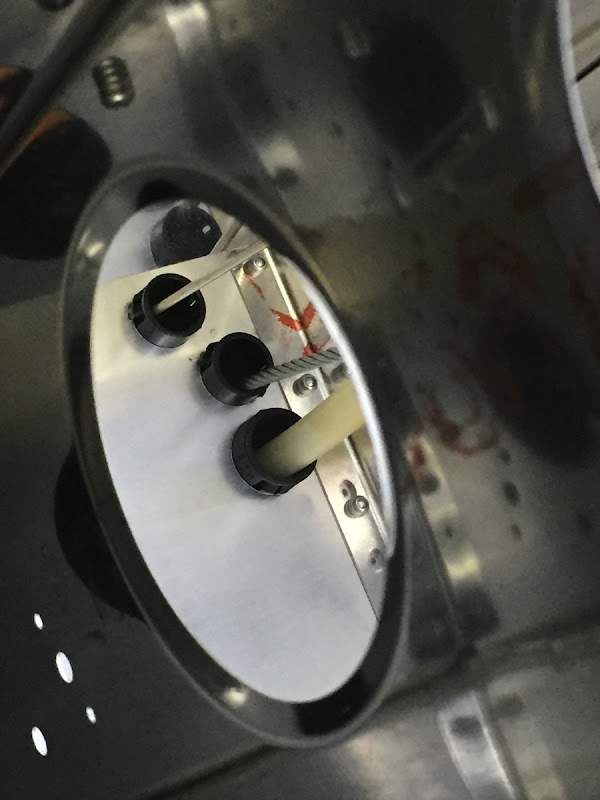 I put the seat ramp back on and reconnected the cables, but they were still too short.  Damn.    If I tighten them up to the specification of “not more than 3 threads showing” I get a tension that is off the scale and results in much too much resistance in pitch.

The reason I’m not really buying the ‘cables are too short, return them for a longer set’ is that it’s both sets of cables.  That certainly suggests that there’s a common (systemic) cause that I’m not seeing.

I’m also not too interested in replacing the ones in the plane, simply because of the labor involved.  I’d rather use a longer turnbuckle which, conveniently,  happens to exist.  Specifically, the MS21251-B5L turnbuckle is 4.00 in long while the MS21251-B5S (supplied) is 2.25 in.  I think the extra length will address the problem nicely, and without the labor of changing out the cables.  A VAF commentator opined that I may run out of ability to later tighten them when the cables stretch with time, but I don’t think that will be a problem if the -B5L’s are threaded all the way to the midpoint as are the current -B5S’s.

I’m going to call Van’s on Monday and see if they have any other places to look for the mysterious length anomaly and either get their blessing for using the -B5L’s or get them to exchange my current cables for new (presumed longer) ones.

It’s been a long time since I last posted, but not because I’m not busy with the plane.  It’s just that I’m not completing any pages so there’s no formal report to post.

I spent a lot of mental effort reviewing all of my options for transporting the plane from my garage to the airport.  The big decision point was whether to leave the tail feathers off and transport it that way, or finish up assembly and take with with the tail feathers attached.  My concern is the wind loads of large trucks passing by and having the stabilizers to push against.  I finally decided on doing the installation at home and trailering everything in situ.

Rationale:  There are quite a few pictures of trailered RV-12’s with everything except the wings and no horror stories to go with them.  There are several trailering rigs that even have the plane being positioned tail first, in what seems to me to be an aerodynamically unstable arrangement, yet still no horror stories.  I have selected a route that only exposes me to high speed large trucks for 2 miles (out of a total of 20 miles).  I will secure the airframe to the trailer with a large pair of pseudo-spars that will protrude from the fuselage far enough to be lift handles / tie downs.

The side-to-side wind loads are my biggest concern for trailering and then I had the collision of two thoughts that left me with a satisfied conclusion: I can put on the horizontal stab (and get lots of other things finished that are dependent upon that step) and leave the vertical stab/rudder off since there are no other steps that are dependent upon that.  This lets me get the majority of work done at home and not have to worry as much about the side-to-side wind loads during transit.   All in all, I believe it will be safe to trailer the completed aircraft. To quote an old TV show, “I love it when a plan comes together."

That cleared up a great big mental road block that left me hunting for ’things to do while the plane is not completely assembled.’   The example that comes to mind was getting ready to place the upholstery, then realizing that the rear bulkhead isn’t installed, thus I can’t fit that portion, etc., etc., etc.  OK.  Deciding to completely assemble the plane at home allowed me to get back to work with enthusiasm.

To Do at home

To Do at airport

I spent 4 or 5 hours sanding the fairing, and have nothing to show for it as far as progress in The Book.  On the other hand, I’ve been renting hanger C-1 since July 1st, but today was the first day that I actually spent any time out there.  I took Nick shooting and we ‘detoured’ by the hanger as his way of earning the rental of an AR-15 (he likes the high powered rifles.)

We swept years of dust & junk and spider webs.  I picked up some ‘cheap’ shop lights ($200!) to hang because I know I’m going to do lots more work on 012 while she’s living here.  Spent about 30 min on a 16’ ladder hanging the lights.  Power is hard to come by—just a single outlet at the far inside corner.  I briefly though about tapping into the light bulb but that’s too high even for the ladder to reach, so I’ll just use the extension cords.

Note also the ‘scare owl’ hanging just to the left of the vertical support.  There was a lot of bird poop around that area so I got the owl to keep the nesting down to a minimum. 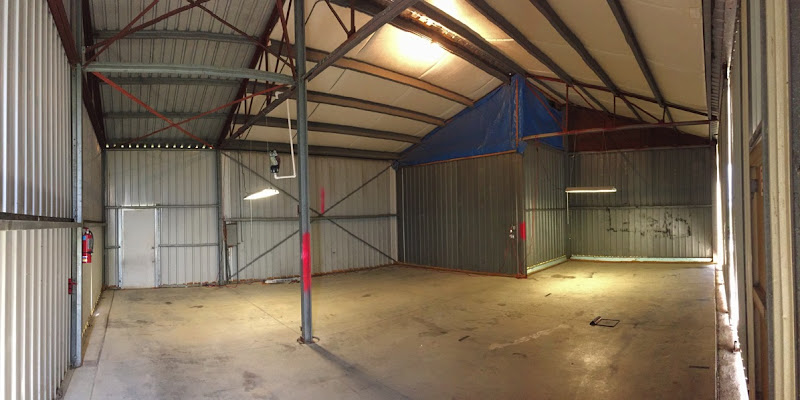 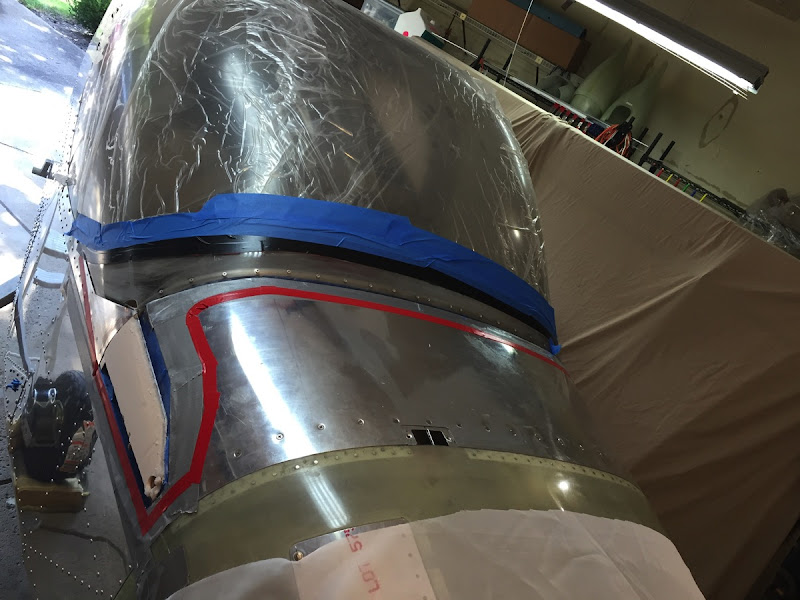 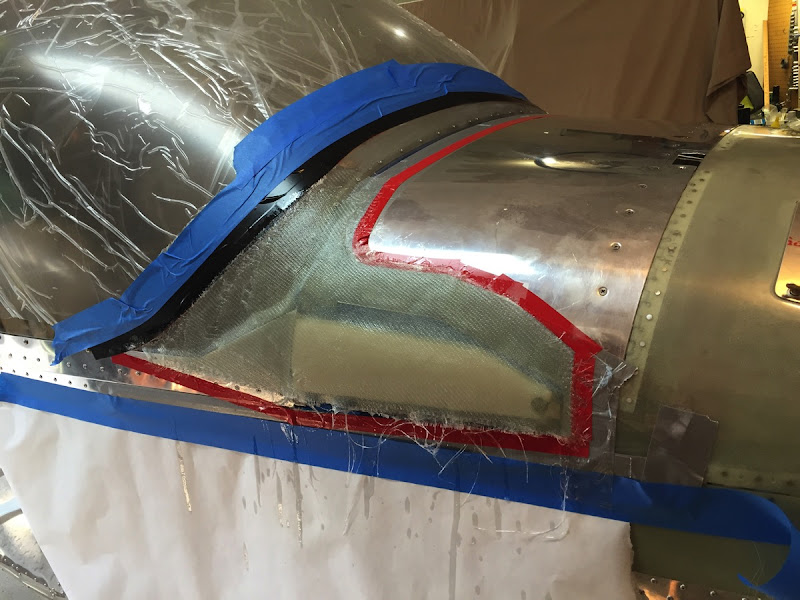 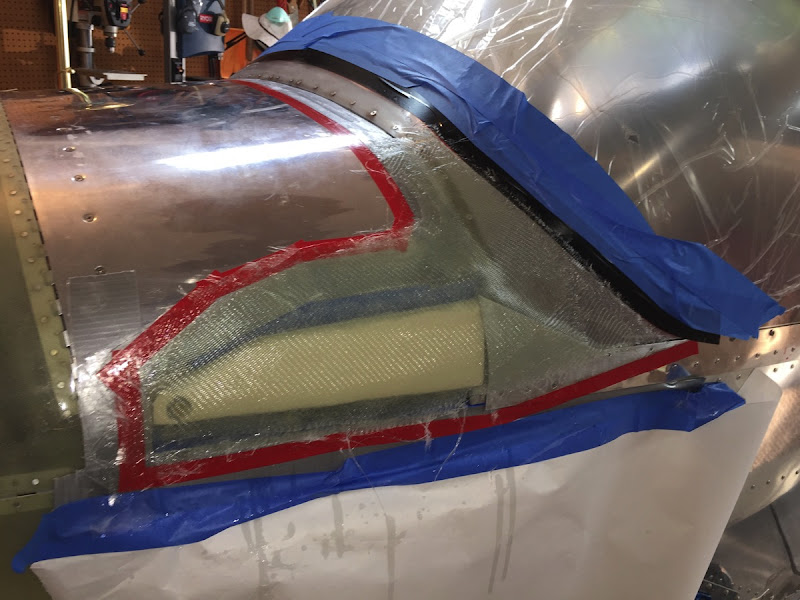