Well, it doesn’t look very nice, but it’s usable.  The autopilot knobs are retrofit into the center panel.  As outlined on the previous post, I needed to make the cutouts with a dremel tool and then file the rough cuts to accept the modules.  Like I said, it looks home made (‘cause it is.)

It’s also getting close to time to paint the panels... 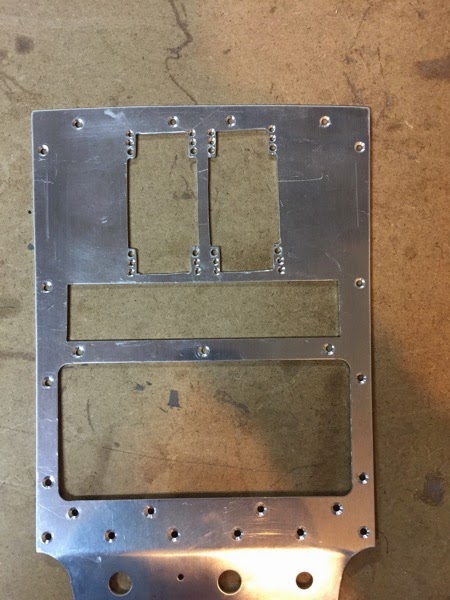 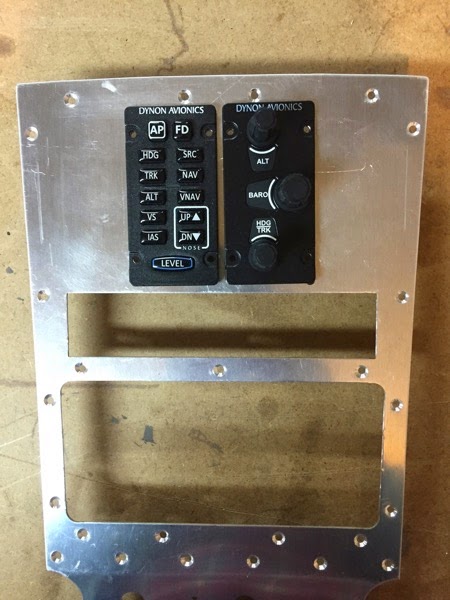 The first place I thought I’d start with the Avionics kit is the very last chapter, 58.  This chapter is how to retrofit the autopilot control knobs into the center panel.  (Note: the autopilot is typically controlled with soft knobs on the primary display, and this is an optional kit that provides dedicated hard knobs on the panel.)

The majority of the instructions are to help with the retrofit process, but I haven’t gotten anywhere near that stage so this is actually much easier.  The picture below shows holes drilled and lines scribed & taped prior to cutting out the panel for the two modules.  The yellow tape is going to be the edge of the cuts.  The blue tape is “don’t cut here!” since the yellow tape is wider than the slot that will be left between the two cutouts. 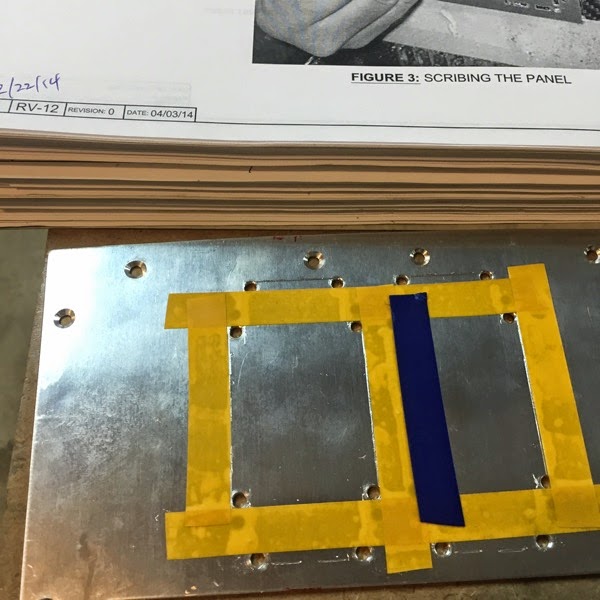 Center Panel prior to cut outs.

This is an odd page indeed.  It’s an absolutely trivial step of just squeezing 2 rivets to attach the ELT bracket to the bulkhead.  What makes it so weird is that the piece that is riveted in is not included with the Finish Kit, but rather is part of the Avionics kit.  I am really a bit confused as to why they didn’t just put it in the Finish kit.  (Oh, BTW, if you aren’t thinking things through all the way, you may install the fuel tank later in the Finish Kit but before you get your avionics.  You’ll need to remove the fuel tank...)

Squeezing these rivets was a moderately nostalgic process since I haven’t done any for a while.  Find the rivets.  Find the squeezer.  Get the dies.  Install them in the squeezer.  Decided to install them the other way.  Eyeball the gap for the squeezed distance.  Find the cleco pliers and a cleco.  Attach the part.  Try to install the 1st rivet.  Realize that the punched hole is too small.  Find your favorite drill.  Find the #30 reamer.  Remember that your favorite drill needs a new chuck.  Find back up drill and install reamer.  Ream 1st hole.  Install rivet.  Squeeze rivet.  Remove cleco.  Ream 2nd hole.  Install rivet.  Squeeze rivet.  Find acceptance tool.  Verify shop heads are acceptable.   Put away tools.  Take picture.  Sign off page in The Book. Whoops!  This is a late entry.  I just noticed that I hadn’t signed off on this page although I completed it some time ago.  For the record, please be advised that the control sticks have been installed. 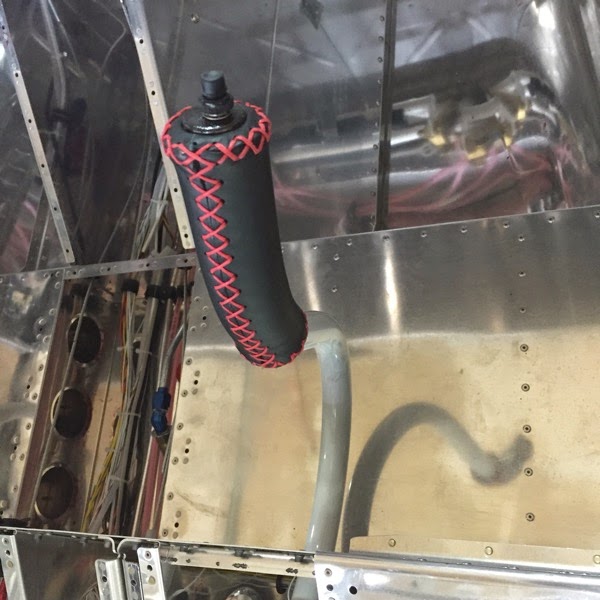 Close up of R control stick 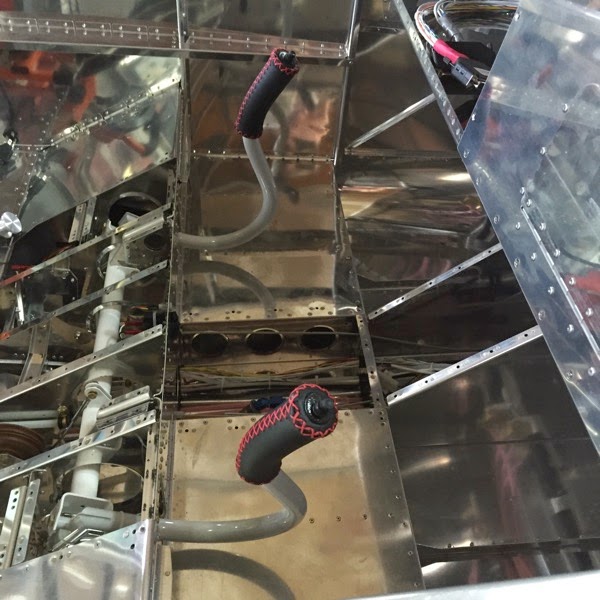 On Dec 3rd, my final crate arrived with the entire avionics kit and firewall forward kit.  I didn’t have much time to do anything with it, as my daughter and her family had just arrived from Louisiana to visit. Nonetheless, I managed to snap a few pics as it arrived, and then as I took it apart a little bit.  At the time of this posting, I haven’t done any inventory of the parts.  That will have to wait for a few weeks (work schedule from hell, plus the sad trip to Phoenix for the funeral of my nephew).  Speaking of waiting for weeks, I have done some work on the control systems in the last two weeks, but no pages were completed, thus no documentation. 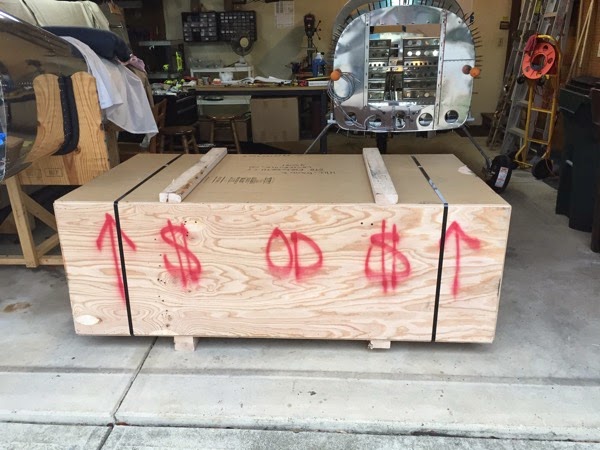 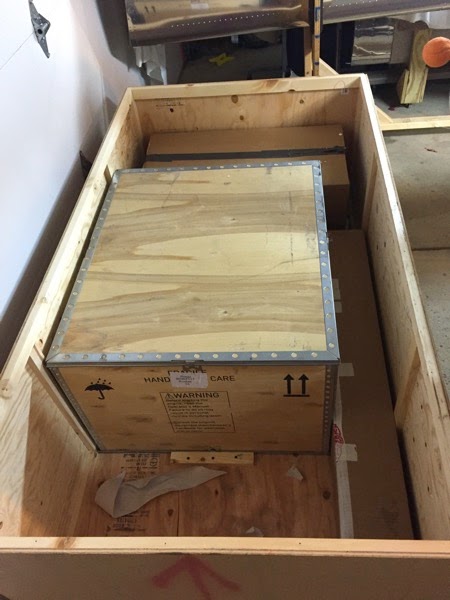 It’s like a матрёшка doll—open it and find another inside!  This is the engine crate. 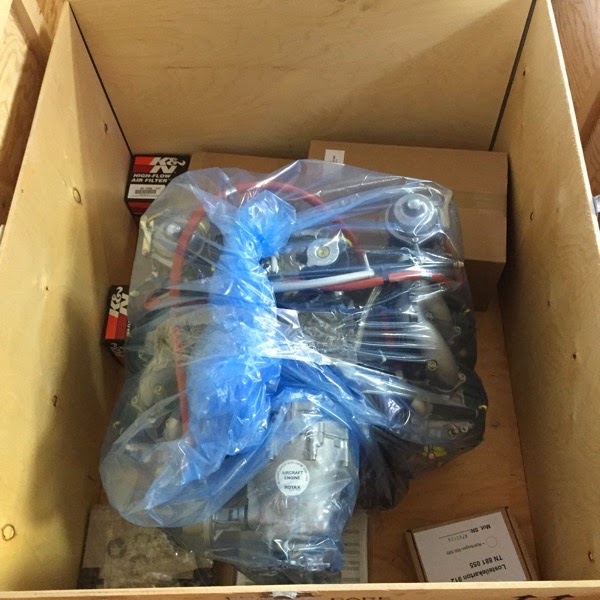 Engine, ready to be unwrapped 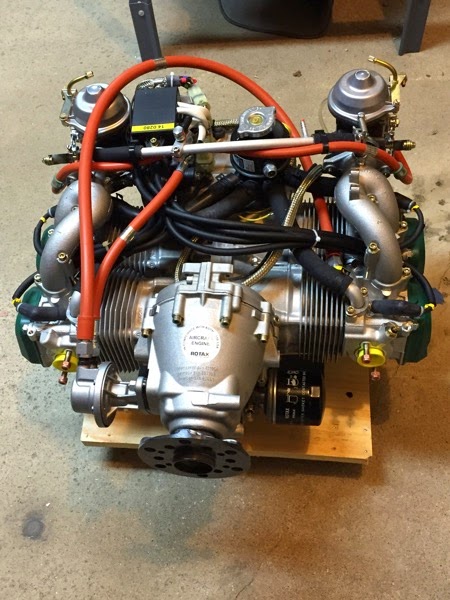 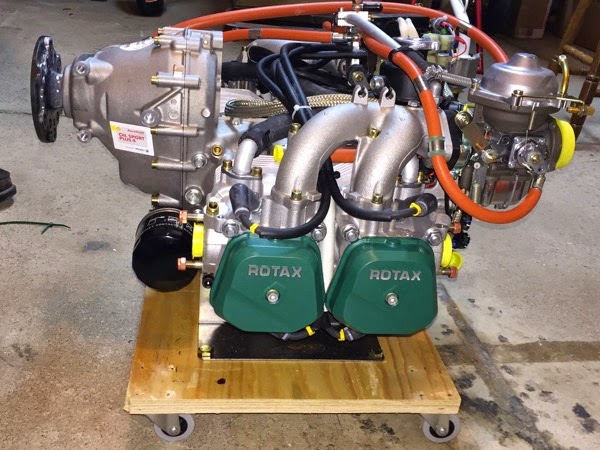 I’m probably not going to work on this for a while.  It was challenging to get it out of the double crate, and I want to be able to have some mobility until I hang it on the plane.  Nick (Big Nick, fiancé to my daughter, Melena) helped with the labor & lifting. To gain the mobility,  I turned the small crate over and used a big drill and a jig saw to cut out the base of the crate that held the tapped lugs and just rebolted the engine to the crate floor after quickly attaching some wheels.  (The wheels were scavenged off of the no-longer-needed frame that I use to build up the fuselage.)  The engine is now wrapped in a sheet and resting quietly beneath the fuselage until I can get back to work on it. 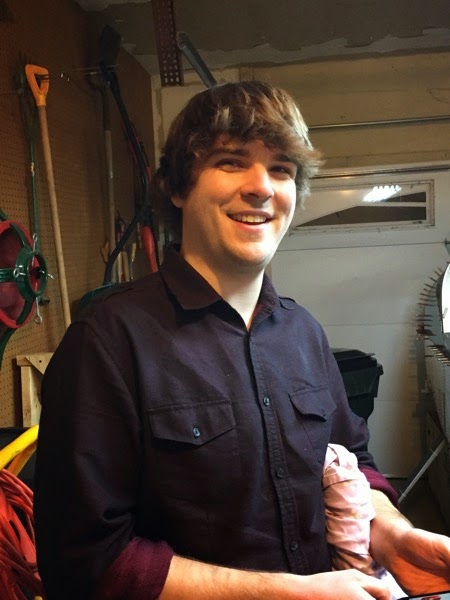 I finished unpacking everything and getting it all inventoried.  The only things that I was missing in the kits was the documentation re: the contents of 5 bags.  I got those by email and did my last check only to find that I’m missing just one piece: ”Al Bushing 0.197 x 0.313 x 0.968" .  The other “gotcha” was that they sent me a European transponder.  I actually got a phone call from Daryl who apprised me of the problem before I even opened up the boxes.  He said I could use their UPS shipper number, but the local UPS store said I’d have to drive to the main office an hour away.  I sent it FedEx instead.

Well, I spent more time looking for the parts than I did actually using them.  For some reason, automotive brake lines are filled using a vacuum to pull fluid through the system, while The Book specifically states to force fluid from the calipers up into the brake reservoir.  It took a bit of searching to find the basic tools seen below.  Once I got the hang of it, it was pretty straightforward.

The only bummer is that there’s a leak at the brake line-to-caliper fitting on the left side, so I’ll have to drain that side and remove/replace the AN823-4D.  C’est la vie. 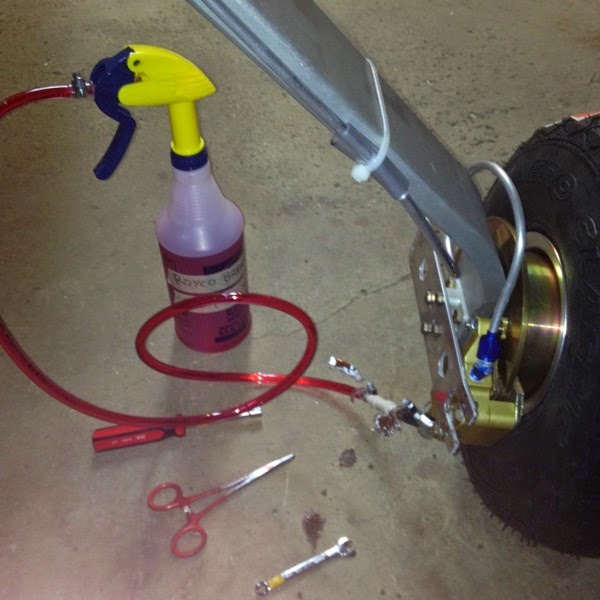 There was a leak at the L fitting between the brake assembly and the Al line down the leg.  I finally got around to removing and re-installing the fitting.  I’m slightly concerned about the brake fluid that leaked onto the brake pads, so those will be very carefully watched when I get around to taxi tests.