It's still amazing to me (not in a good way) how a simple, straight-forward job can evolve into a 2 hour ordeal and then have a less-than-desired outcome.  I decided that I had to do *something* so I chose to put the ASTs on the stabilator.  First, I cut one of the hinge pins too long.  OK, that was fixable.  Cutting that steel is much harder than the aluminum, but I managed to get it done after changing the blade on the bandsaw.  OK, got the hinge pins made.

Threading the pins requires that they be perfectly aligned, which wouldn't be a problem except for the opposite AST hinge is in the way.  Yes, that little deviation makes a difference.  When I finally got the 2nd pin in place, I couldn't rotate the bent portion to be down so it could be safetied.  I had to remove the 1st hinge (Left — for some reason it's a bit easier to install than the right) install the R hinge, and then re-install the Left.    Getting the safety wire pliers to latch required using a pair of pliers to squeeze it enough to latch.  I ended up safety tying on the outside, instead of the inside, of the stabilator.  (Not as pretty.)

Lastly, when I put the bolt through the ears of the ASTs, I discovered that there's about an 1/8"th difference in the trailing edges.  I think that the fix will be to remove the 8-32 bolt and hold the edges exactly even to each other and match drill a #10 hole instead.   I'm not going to do that now.  It's 1:30 PM, but that's my equivalent of 1:30 AM!  I'll send this, and a few other less-than-inspiring photos to Rick and get his feedback.

On the other hand, it feels good to make some progress.  It's very curious, but I found that I was avoiding even this simple page while I was in waiting-limbo regarding the wing kit.  Now that I know it's in progress, I'm all gung-ho to get going again. 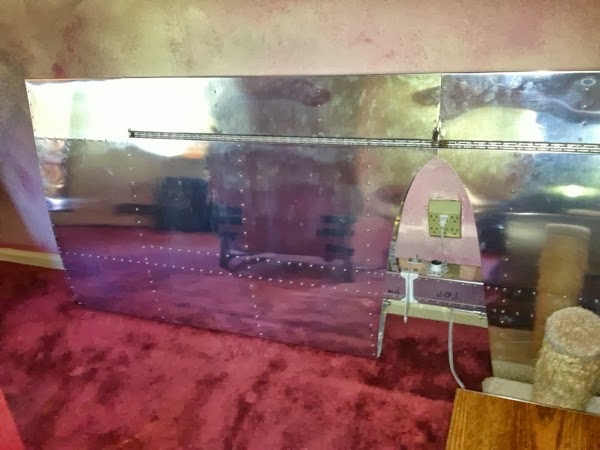 View from aft looking forward.  Note the 1/8" discrepancy between the trailing edges of the ASTs. 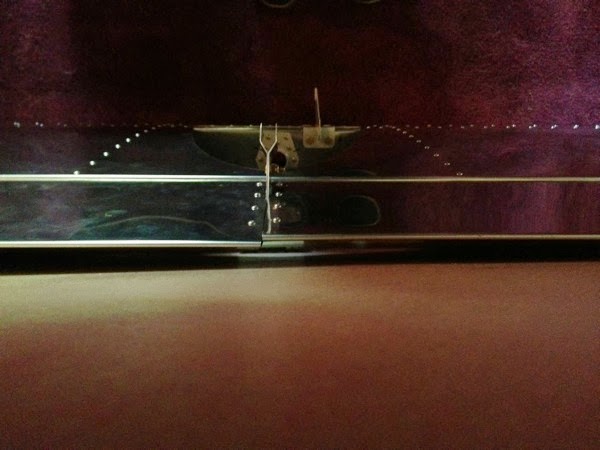 My bank sent me a security notice that an online transaction has been charged against my card—Van's Aircraft Inc has charged $5235!  I can only hope that means that wing spars have been manufactured and my kit has advanced to Crating.  Hopefully, later today, I'll get a note from Van's that it's being shipped.  Whoo-Hoo!

Speaking of charges,  I'm trying to get a loan from NAFCO (Nat'l Aircraft Finance Co., although their website is https://www.airloans.com —go fig!   The latest I got was (aside from the need to prove that I have earnings) is that they need a completed affidavit from Van's in order to classify the plane as ELSA.  To do that, I have to take delivery of all of the kits.  If I could do that, I wouldn't need the loan...

What's weird is that they will finance the kit if I do it as an EAB.  I'd rather certify the plane as ELSA since it will probably increase the resale value (or accelerate the process), but I'm still not sure which way I'll go.  I'm going to call NAFCO later today to continue to discuss the matter.

I completed the trim/servo actuator assembly and mounted it just long enough to get pictures to prove it.  I took it off the tail cone and stored it inside the front of the tail cone in order to prevent it from getting bent, bashed, broken or bruised hanging out the in the air all alone.  I expect it will be about a year before I get the feathers attached and that pushrod will certainly get broken if it's attached to the tail. 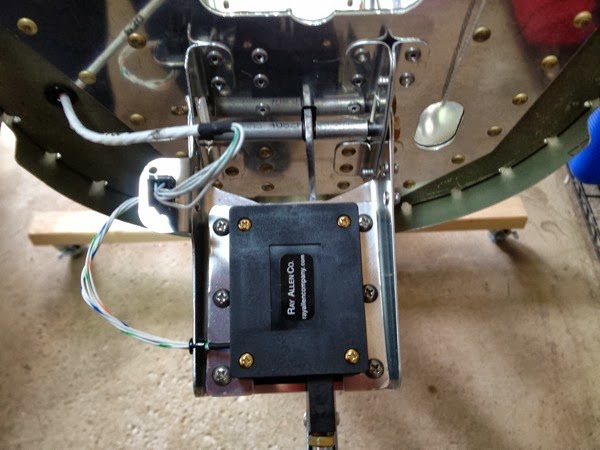 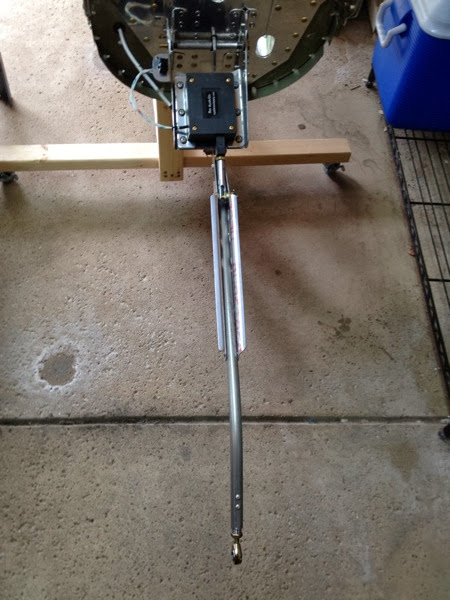 Not only am I waiting for wings, I also was waiting for the teflon bushings, as I had ruined 2 of them on an earlier step.  They arrived today and I had a good birthday in the garage building up the AHARS bracket and and activator assembly. 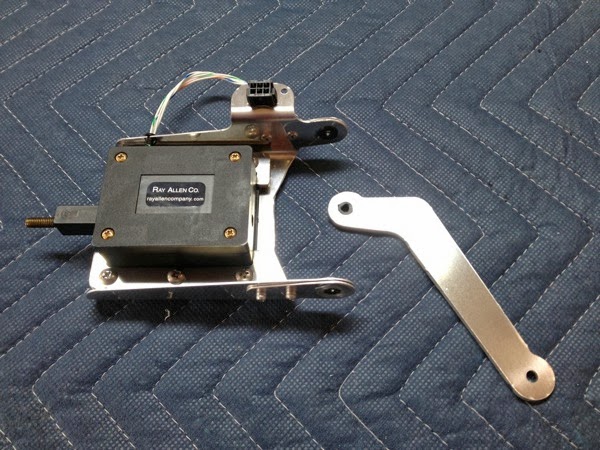 in case you have wondered why there's no progress, it's because I'm waiting for my wing kit to be shipped.  It was supposed to ship last week, but as of then, they had not made wing spars for 4 kits and the lady on the phone had no idea of when they would be ready.  Very frustrating, to say the least.

Although I have no wings, I did do some minor parts that don't require attachment to the tail feathers.  I forgot to take pictures of the parts, so I just pictured the page. 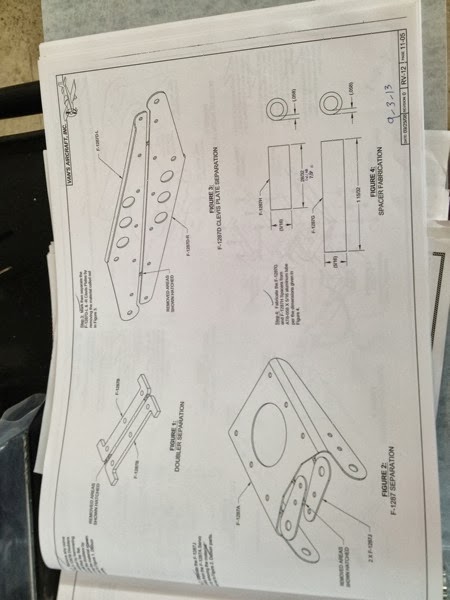 Fairly straight forward application of the top skin and forward attach rib for the vertical stabilizer.  It's almost anti-climatic as this step is the final step for the completion of a big, visible part—the tail cone.

Side view of tail cone 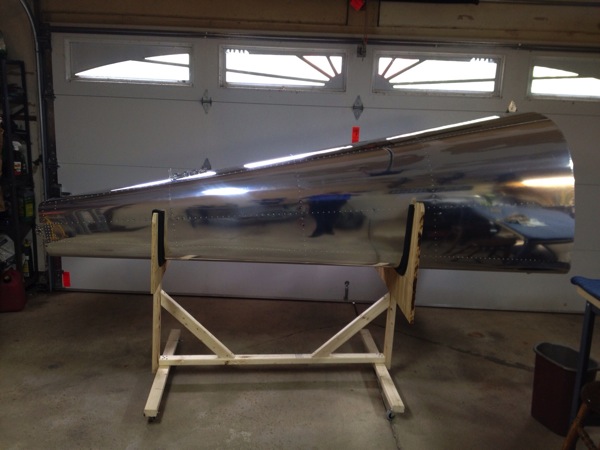 close up of the forward skin rib for the vertical stab.  It's amazing how dimpling and riveting felt routine instead of nerve wracking. 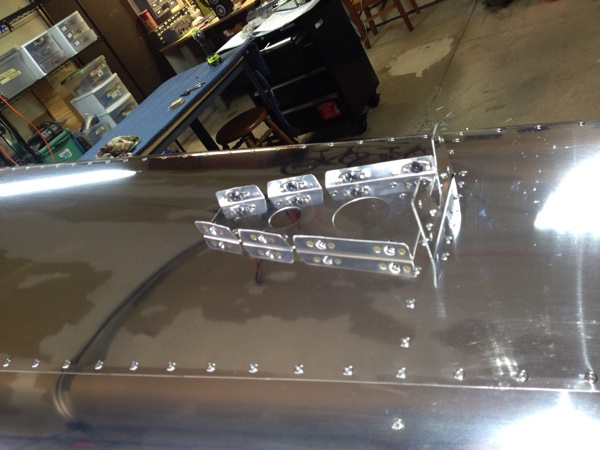 I think this is kind of cool.  The internal reflections from the smooth aluminum make it look like there are lots and lots of internal frames, but there are actually only 3.  You can see some of the internal plumbing on the floor:  taped strings that are looped through the rudder and stabiliator cut outs, and the trim motor wires and aft pitot line coiled up on the lower right side of the picture.  It's very hard to see, but the static line and pitot line are hanging from the middle of the forward frame. 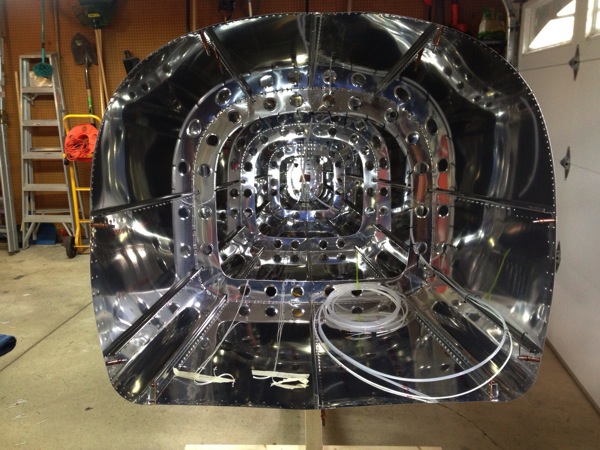 This is a bit easier to see the pitot and static lines.  You can also see the attachment plate sticking up from the aft frame, through the top skin.  Note the brass cleco on the inside of the skin.  I elected to place a cleco in the forward-most holes of the skins to keep them from flapping around, but I didn't like the look of the clecos on the otherwise finished tail cone, so I put them inside out of sight. 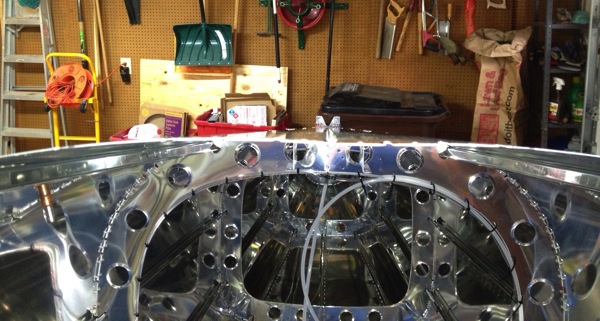