Today marks the official completion of the airplane, with the issuance of the Special Airworthiness Certificate.  The FSDO inspector is a very nice gentleman named John.   He spent about an hour going over the plane.  He took issue with some build techniques but deferred to the fact that they are called out by Van’s.  He found some rubbing wiring and oil hoses in the engine compartment, a loose bolt, a missing cotter pin and not much else.  Overall, he seemed quite comfortable with the way I’ve built N76012 and proceeded to issue the coveted Salmon Slip.  (I really don’t think it’s pink—do you?) 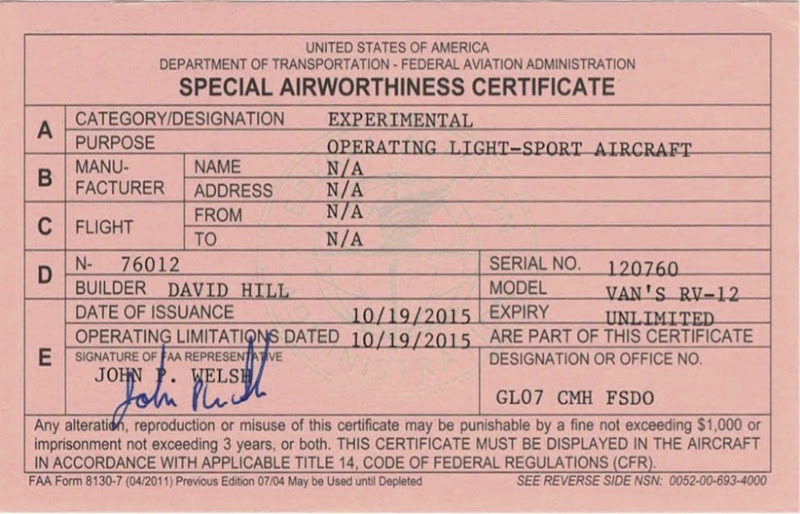 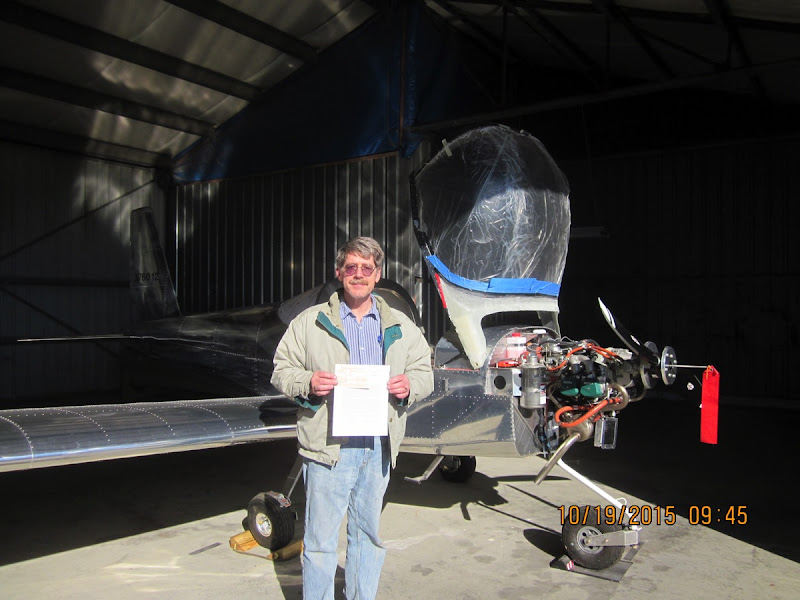 traditional “here it is” photo 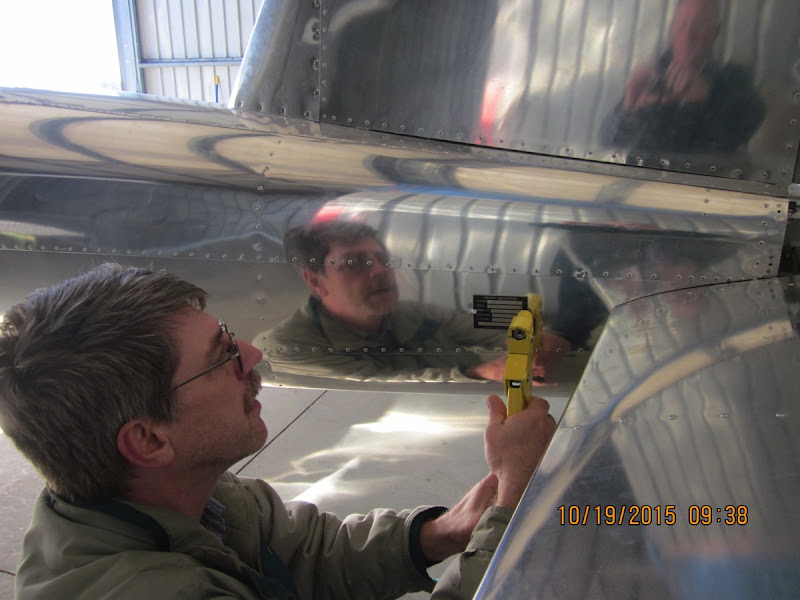 I’m taking a break for a week while I have family members arrive from out of town.  Upon my return, I’ll address the squawk list (the biggest of which may be having to remove & reroute the oil lines.  Messy.), have Shane teach me how to properly sync the carbs, get someone from the local Van’s flying group to be my 2nd set of eyes and do the Product Acceptance Check, do ground runs and taxi runs, get an hour of dual in upset recovery in a local flight club’s LSA, get some time in a friend’s -12, coordinate with the EAA flight counselor and then go fly this thing!

VAF has many posts regarding the setting of the pitch of the Sensenich prop.  The tool that is provided by Sensenich is really not very precise.  They provided a wooden template that is supposed to help create an accurate surface upon which to measure blade angle, but it’s also not too precise.  Last week, Van’s released an update to The Book that uses a steel tool to hang on the edge of the blade and allows a magnetic level to be used to set a specific angle (71.4°) relative to the canopy deck.  It’s very hard to see in this photo, but the prop is leveled using some wooden blocks (custom cut to an arbitrary but equal height), a paint stir stick, and a socket (from a socket set.)   I didn’t have a bubble level at the hanger and I realized that I really couldn’t use the digital level since it can be zeroed and thus does not have an absolute way to establish level.  I used the cylindrical socket on top of the stir stick:  when it didn’t tend to roll one way or the other, the prop blades were level!

With that task completed, I closed the shop and went to work.  Next step:  Airworthiness Inspection on 10/19! 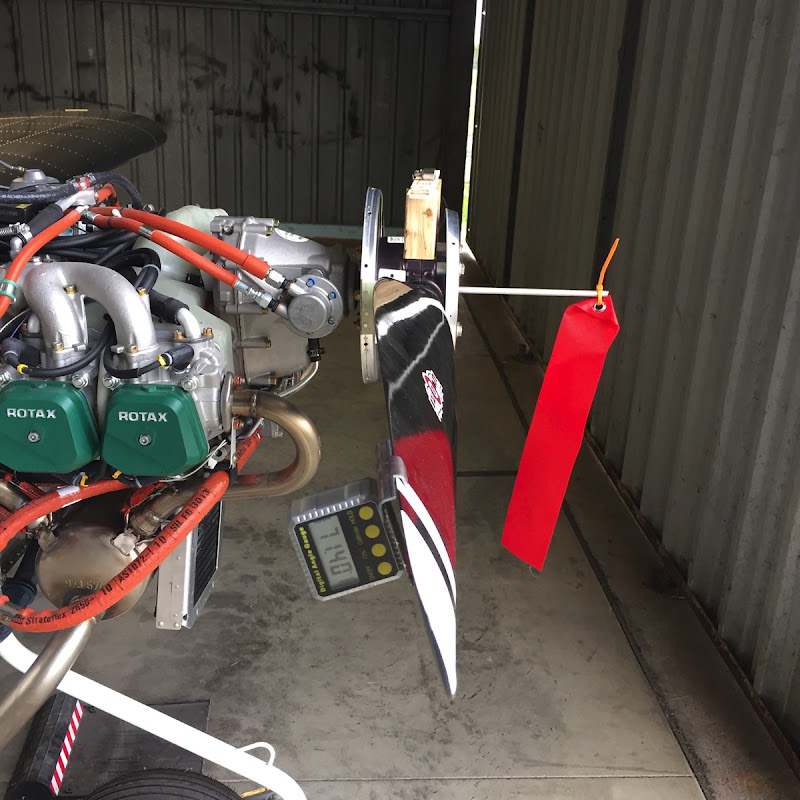 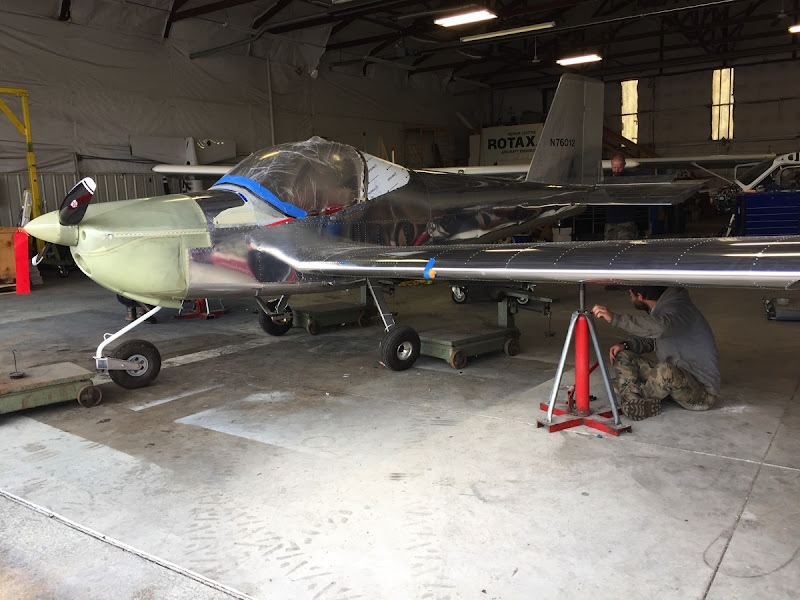 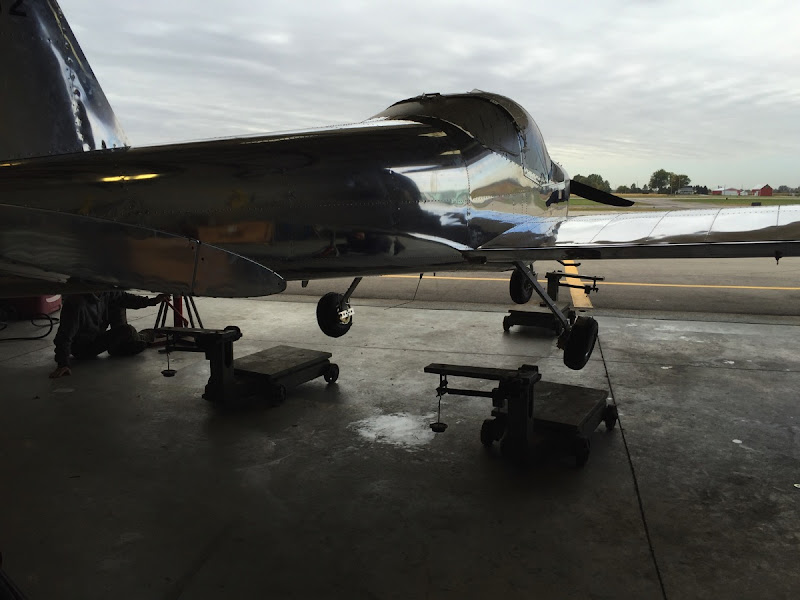 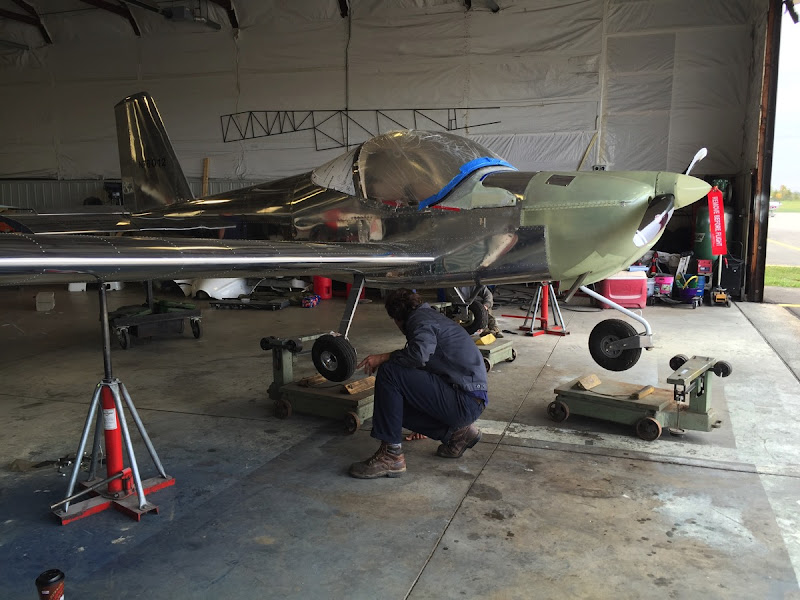 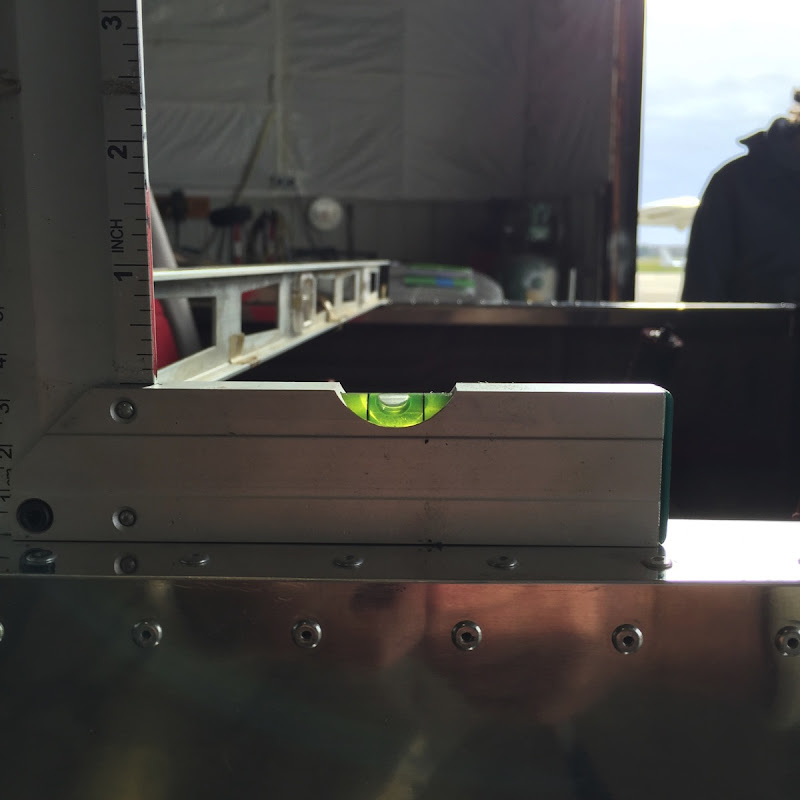 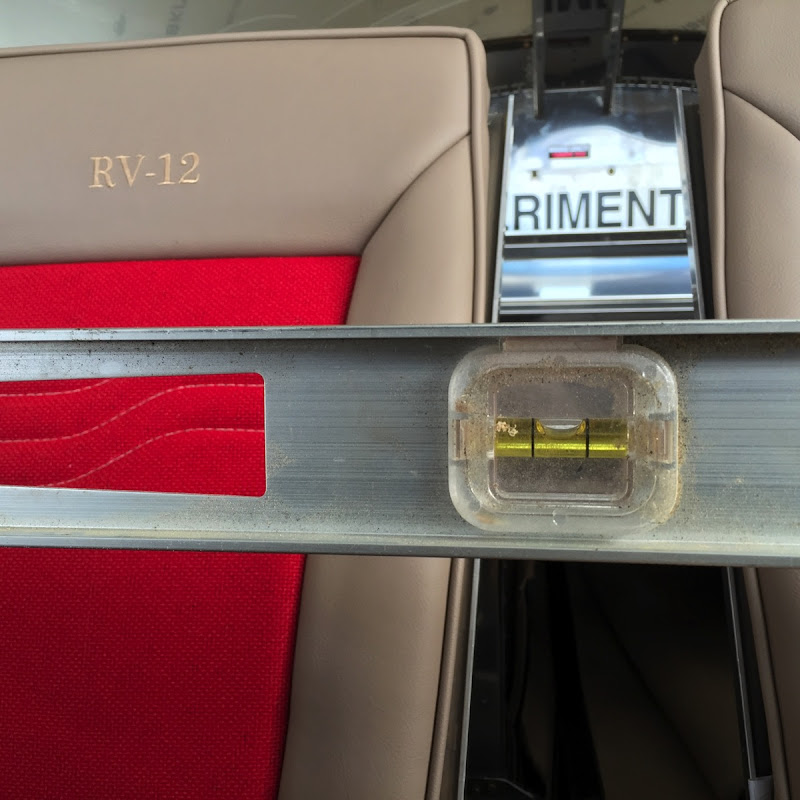 One of the last finishing details is the placement of the various placards that are part of the legal requirements for airworthiness. 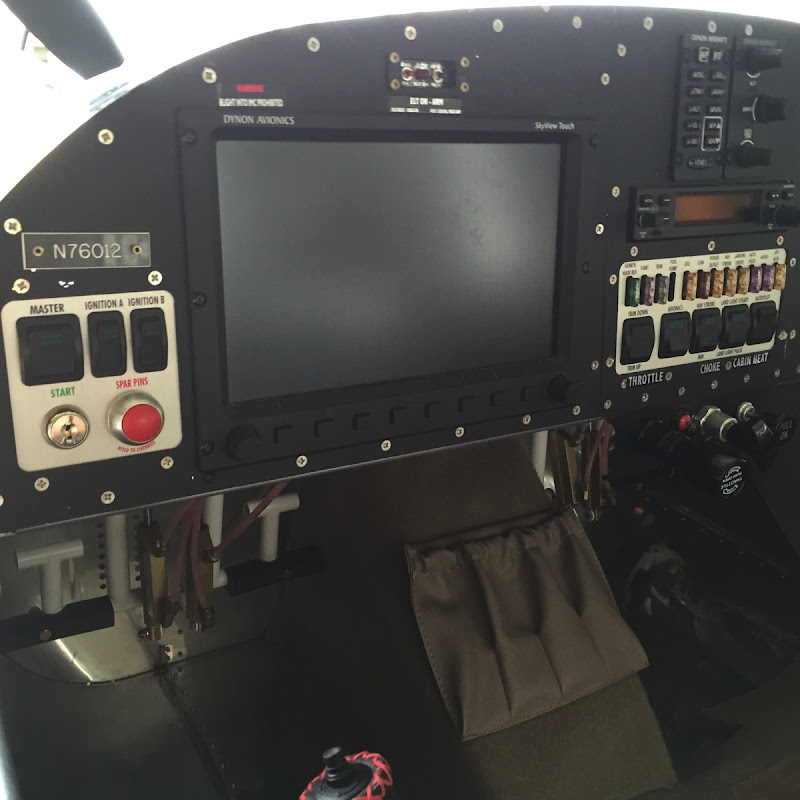 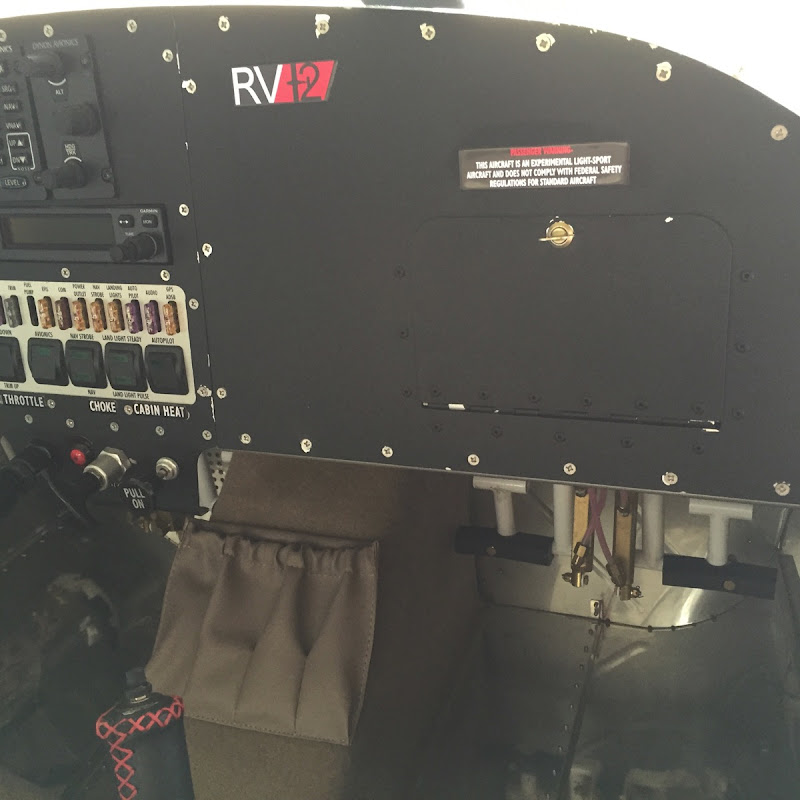 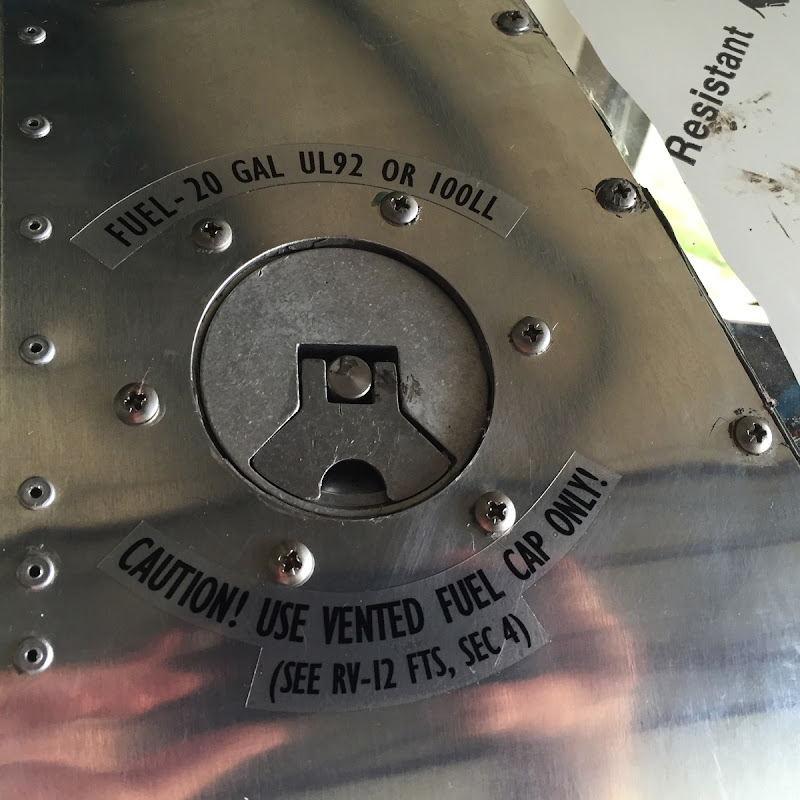 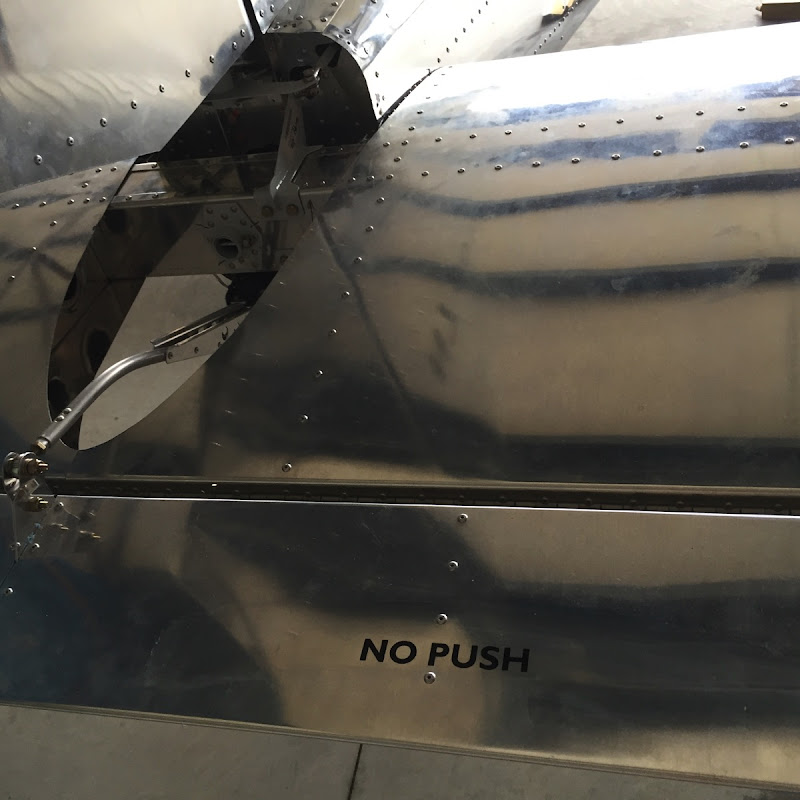 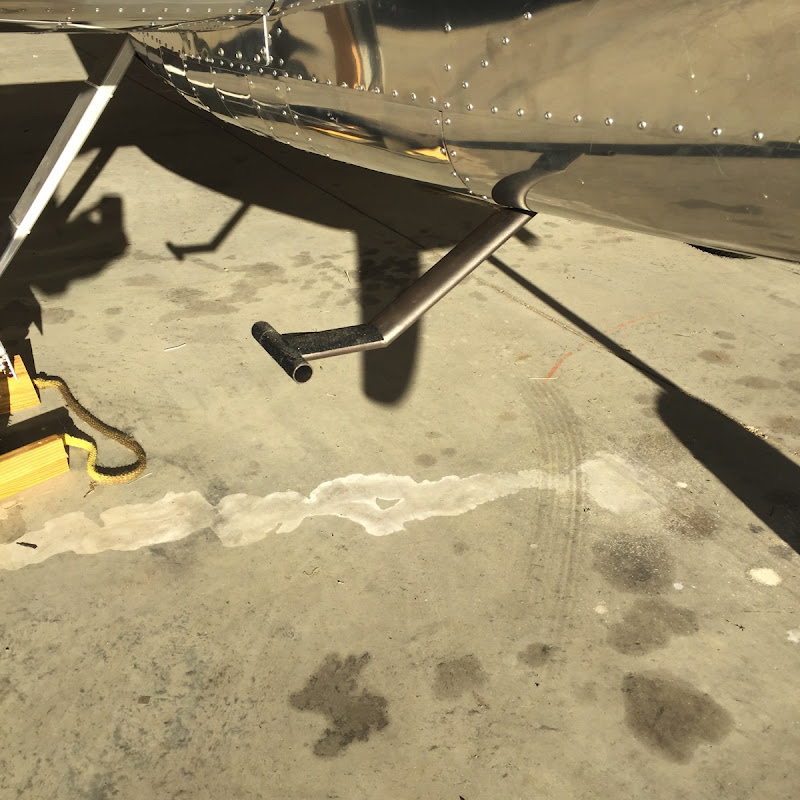 Yesterday was a really fun, satisfying day.  I had achieved the installation of the H. stab cables last week (just never had time to update the blog until today) and yesterday was the day to start the final-putting-things-together-for-real process.   Out of esthetics, I choose to start from the tail and work forward.

The V. stab went on easily.  The rudder took some finesse in order to line up the various washers and hold the rudder and place the bolts and do all of that by myself.  I ended up putting the bottom bolt in first (fairly easy, since I could stand on the ground and have pretty good access) and duct taped the rudder to the stab on two sides: that actually kept it in pretty close position to allow me to find some creative ways of holding the bolt, a washer and a nut from an awkward angle.  Got it done.

Thence, to the inside.  Although I still can’t install the split bulkhead, I did take advantage of the split baggage floor and left the larger piece open for the inspection in a few weeks.  Fuel tank is physically installed (but not yet plumbed.)  Last year, I noted that the flapperons scrapped against the fuselage and I had made some notes of how much to trim, so they finally got sanded about 1/8” to 1/4” on the lower surfaces.  Nick & Lada came to the hanger (en route to the local firing range for some shooting) and they helped me put the wings on.  As predicted, the wings fit much better when the torque tubes are installed on the correct sides.)

Oh, and during the meantime, my partner in the Cardinal arrived back from a cross country with a couple of squawks.  Both planes needed air in the tires, so I pumped up 012 and took the compressor to the other hanger and filled those tires, too.  I reinstalled some corrupted software on the iPad, figured out that the Stratus2 wasn’t charged, put those back in the Cardinal, did a test flight around the pattern and filled up the plane as a favor to my partner (just the filling—he’s reimbursing me for the fuel costs!)  All in all, an excellent day being an airport bum! Finally!  I have successfully connected the horizontal stabilator cables with proper tension!  As you may recall, I had problems after running the fore & aft cables and discovered that I couldn’t place the turnbuckles with the requisite minimum number of visible threads without going way over the recommended tension limit for the cables.   Double & Triple checking the routing failed to turn up a mis-routed cable (felt to be the most likely culprit). Longer turnbuckles were obtained, but (as predicted by one of the experts on VAF) they were too long and couldn’t achieve the required tension.

The reluctant conclusion was that the cables were too short, just due to statistical variation of acceptable tolerances.  Gus an Joe at Van’s were pretty cool with it and sent me a replacement set of cables.  It took 2 or 3 weeks until I had sufficient time to get to the project (a minor event—moving out to the airport intervened), but I finally had some time.

I replaced the rear cables first, as they were easier.  I had hoped that that would be sufficient, but there was no noticeable improvement when I re-connected the turnbuckles.  Sigh.  Off came the seat pan (all 60+ screws).  I initially started to use a string to pull each new cable through the same routing that I had used for the originals, but thing got tangled around the pulleys so I ended up completely removing & replacing.  I did have to remove the pulleys, too.  I got everything threaded, loosely joined up with the turnbuckles, reinstalled the pulleys and finally reinstalled the seat pan.  Viola!  The cables tightened nicely to 45 # and there were only 0 or 1 threads showing (The Book calls out <3).  Lastly, I maneuvered the locking pins into place and can sign off this page! 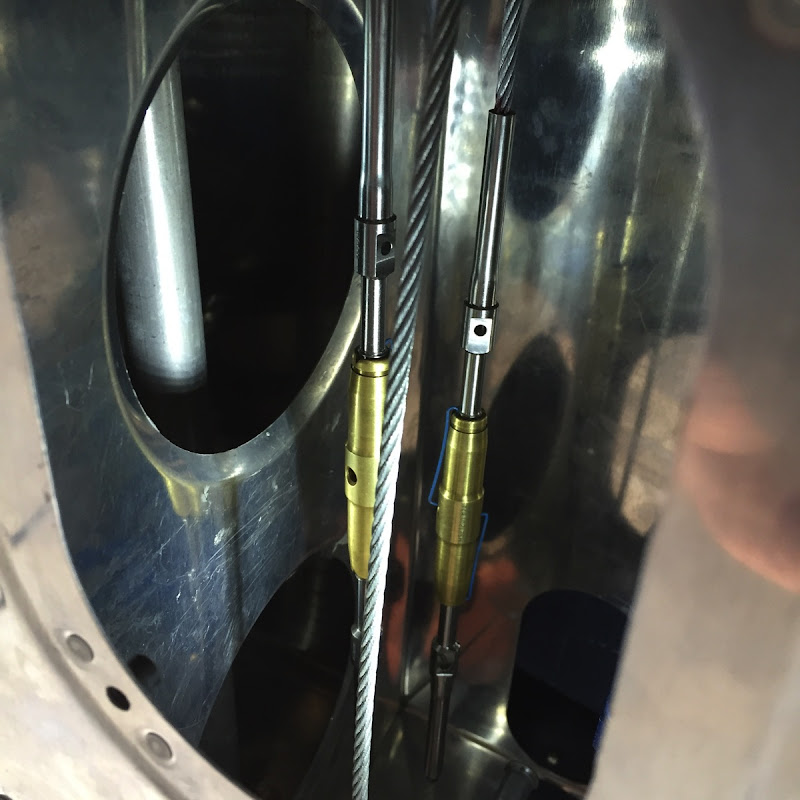