I’ve had several days of working on attaching the lower skins to the Right wing.  I’ve actually accomplished a little bit more than what is called out on page 17-02, as I have also riveted the leading edges.  This wing was ribbed and skinned while on saw horses, so that the chord was vertical.  As mentioned elsewhere, I did this to avoid possibly bending the ribs, but also to learn different ways of doing things.  I was surprised at how much sag there was in the middle of the span, and I needed to put some support under the rear spar to allow the skins to line up with the holes.  All in all, very boring repetitive work, but intensely satisfying. 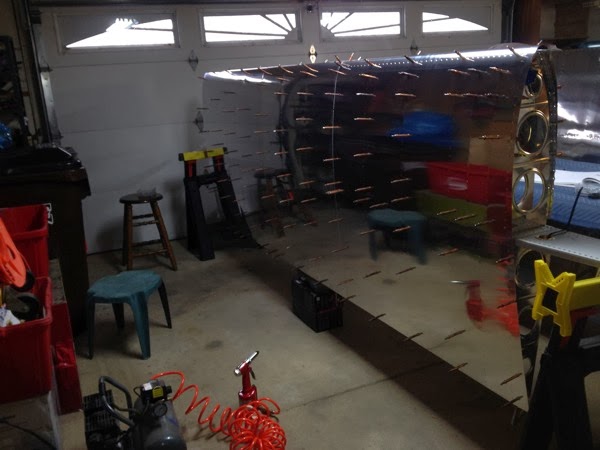 Riveted in place
(lower surface only, in this picture.  You can see some clecos peaking over the leading edge.) 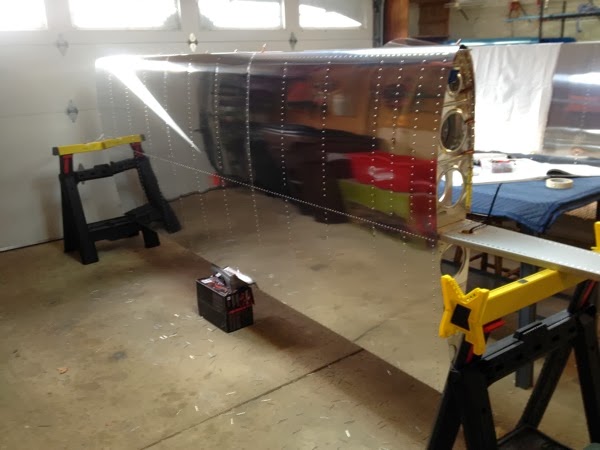 Next step will be another detour to chapter 40, to install the landing light.  I want to leave the upper skins off while I install that light, as I have a sneaky feeling that being able to reach from behind will be very helpful.  Once the light is in place, the upper skins go on and I build out the wing tips and the inboard edges as per plans.

Bob pointed out that I won’t be able to finish the wingtip lights since they require fiberglass / epoxy work, and that needs ambient temps above 70 °F.  Since it’s a pleasant 15 °F right now, I expect that that will be a spring time project.