Well, I made a pretty good “oops” the other day (12-16-13).  (I typically post on this blog when things are slow at work, and I actually had several days off, so I’m late posting here.)

Take a good look at the photo, see if you can see what’s wrong.  I’ll give you a hint: the landing light ribs aren’t making contact with the lower surface of the wing—why not? 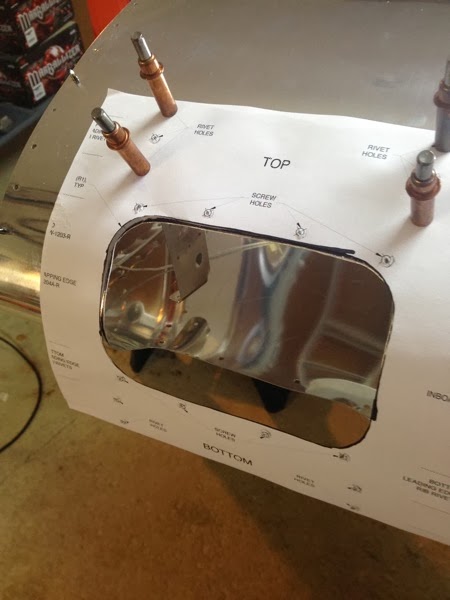 Looking inside the hole cut in the leading edge of the wing, you can see the outer landing light rib clecoed to the upper surface of the wing, but it’s a good 1” away from the lower surface.  The paper template was aligned with the rivet holes on the outside edge and the next rib inboard.  (I originally used a strip of tape from the marks on the paper to the holes to verify good alignment.)  So what’s up?

Look all the way at the very left edge of the picture.  (BTW, I took this picture in preparation for posting a plea for a diagnosis on VAF.  Right after I took the picture, I saw the problem.)    I lined up the template with rivet holes #2 - 4, instead of #1 - 3.   I just didn’t see hole #1, probably because it’s got an inverted cleco sticking out of it.  Damn.

As soon as I figured it out, I sat down and ordered a replacement W-1203-R, list price of $85 (with a footnote saying shipping will be added).  I was very pleasantly surprised to get a notification from the bank that my card was charged only $143 on the 18th, and a FedEx note saying that I should get delivery on the 24th.  Not nearly as bad as it could have been.  The last bit of penance for this oops is drilling out about 300 rivets to take off the ruined skin.

The new skin arrived today.  When I got home from work this morning I could see a nice tall box left out on the front porch.  Only problem was the box was kinda square, not exactly the shape I was expecting.  To be more descriptive, it was about 5’ tall but roughly 18” x 24” (no, I’m not OCD enough to have measured it).  I didn’t think that the wing skin could be in there and that I received the wrong part.  Much to my surprise, the skin was rolled up like a newspaper and standing on edge. 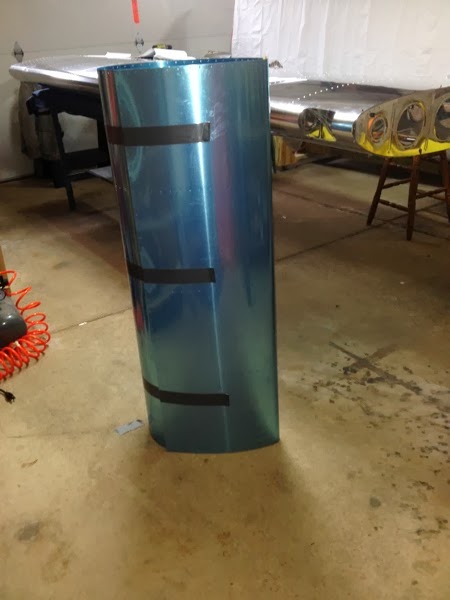 Note the highlight on the surface closest to the camera:  it’s actually the leading edge fold  that has been opened up instead of folded closed.  I’m amazed at how springy the aluminum is and that it doesn’t encounter plastic deformation with these manipulations.  Below is a picture with the duct tape cut and the skin placed on the injured wing, over the skin it will replace. 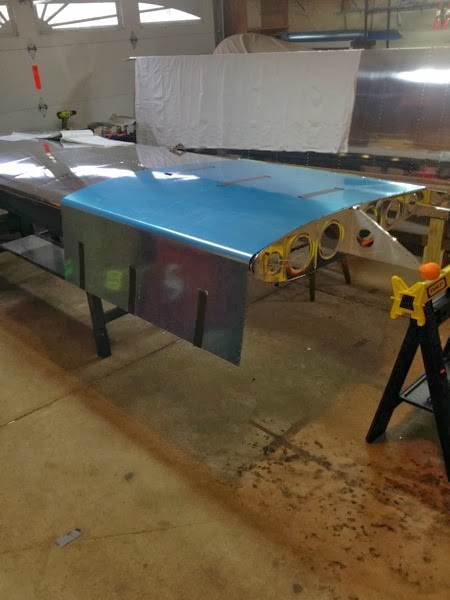 OK, got the skin off.  I learned quite a few drilling-out-rivet techniques.  At first I used a #52 from the local hardware store to drill out the steel ‘pits’ as I have taken to calling them.  That lasted about 5 rivets before the cheap bit broke.  Then I went to using a #40 bit and following with a #30.  Towards the 2nd half of the project, I just went with the #30 and got very good at quickly popping off just the heads and then lightly drilling until the stressed skin suddenly released its tension and could be moved.  After I remembered to remove all of the cleverly hidden (inside) clecos, the skin came off nicely.  I then returned to the naked ribs and drilled out the bottom halves of the rivets.

Not surprisingly, there are some ugly holes due to drill bit wandering as it tried to go through the steel pits and ended up going to one side or another. 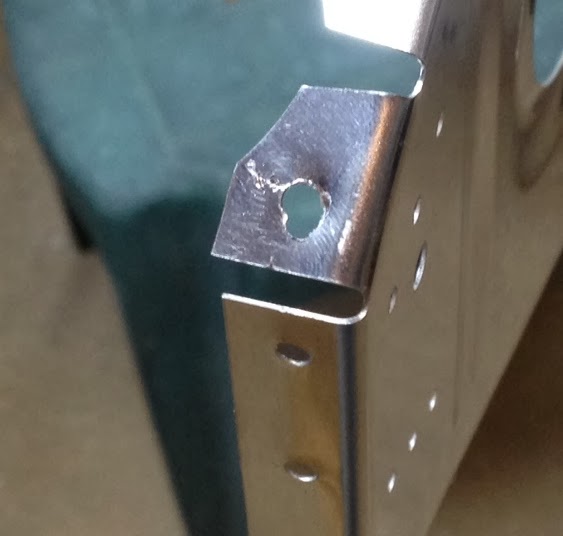 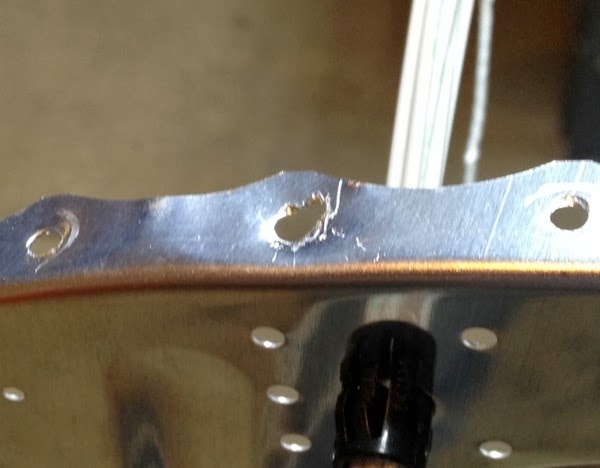 I posted the following on Van’s Air Force. For now, I’m closing down the shop and enjoying another 24 of my 60 hour vacation.

Hi guys,I'm looking for confirmation (or not) that I'm doing a repair correctly. I screwed up the landing light cutout on the R outboard leading edge wing skin, thus I spent all day today removing said skin in order to replace it. I have drilled out all of the rivets and removed the skin itself. Not surprisingly, some of the drilled out holes are out of tolerance for being re-riveted.Question #1: I'm using 50 % out of round as my upper limit of acceptable for re-riveting. Is this reasonable? I can't remember where I learned it, and haven't had much luck finding the original reference (if it exists.)Question #2: Assuming the above criteria, I have about 20 holes that will need something other than an LP4-3. I have some 5/32" rivets from the local hardware store. Is it acceptable to match drill the new skin with a 5/32" bit and use those rivets?Thanks for any feedback,-dbh

I got a lot of feedback about not using store bought rivets because they have no specifications, so you can’t tell if they are adequate.  On the other hand, I certainly couldn’t find any specs for Van’s LP4-3’s.  One VAF poster sent this link (http://blindrivets.gesipausa.com/vie...-steel-mandrel) to a rivet company with the claim that their product was, in fact, Van’s LP4-3.  It certainly looks like an LP4-3, so I’m going with it.  I requested a comparable 5/32” rivet via their web page, but I think they’re closed for the holiday week.  I’ll mark the following holes as “do not rivet” when I attach the skin later this week:

Not too bad; a total of 13 rivets out of > 300 drilled out.  BTW, no one commented on my criterion of “> 50 % out of round.”  The more I though about it, the less sure I could be objective about what constituted 50 % out of round.  I used a more objective criterion:  I placed an LP4-3 into each hole.  If I could see any hole beyond the edge of the rivet, then I called it “oversized” and put it on the above list.

Anyway, Nick & I put the skin on and I clecoed it in place.  I’ll rivet it later this week. 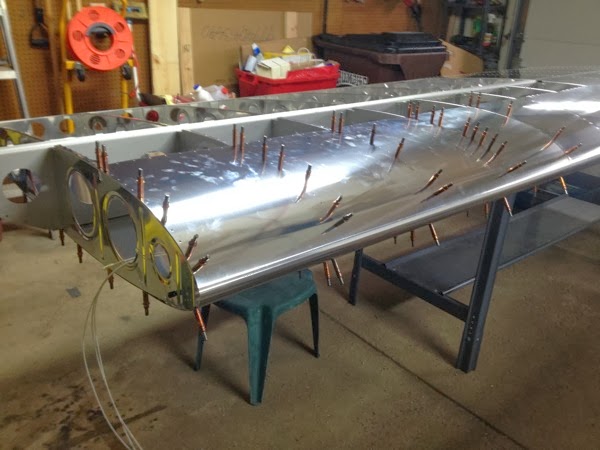 OK.  The new skin is replaced, with the exception of the 13 oversized rivets to be placed upon their arrival.  The rest of the rivets were placed w/o any difficulty.   Total time: 16 days.  Total cost ~$200.  I guess that counts as a learning experience!