Again, this page was largely completed for me by the factory and there really wasn’t much to do.  The plans describe how to locate and match drill the holes in the actuation brackets (shown below) and the pivot brackets (not shown), but those parts are now apparently pre-drilled.

On the other hand, it’s still possible to make additional work for myself.  The nose ribs get a little bracket attached to them (as demonstrated with the washers and AN3 bolt in the photo below.)  I made one without paying attention, then the other with the same degree of care.  I was disgusted with myself when I realized that they weren’t perfect mirror images since the 2nd one had the bracket installed upside down with respect to the first one.  I drilled out its rivets, then noted that the 1st one was the incorrect orientation and I had just drilled out a perfectly good part.  Now I was really peeved with myself so I left the shop for an hour or so and did something else before trusting me with any more tools.

So, I finally got the orientation straightened out and clecoed everything together.  I’m not sure that I needed to do the spacing trick with the washers, as it appeared to be more for preparing to match drill the actuation bracket, but I figured that double checking the factory couldn’t hurt. 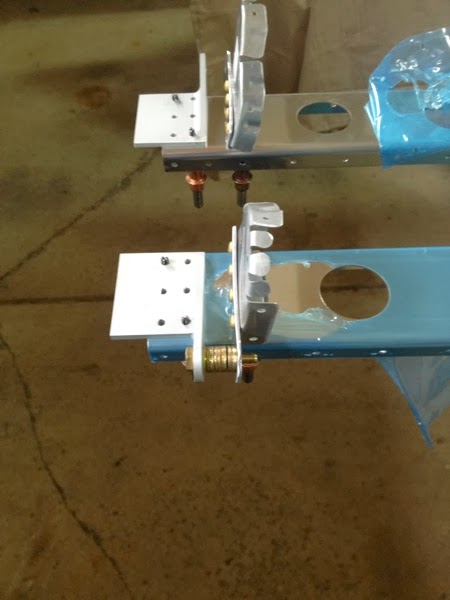