This was, as expected, tricky and tedious, but not nearly as tricky as I think it could have been!   It does’t look like much, does it...? 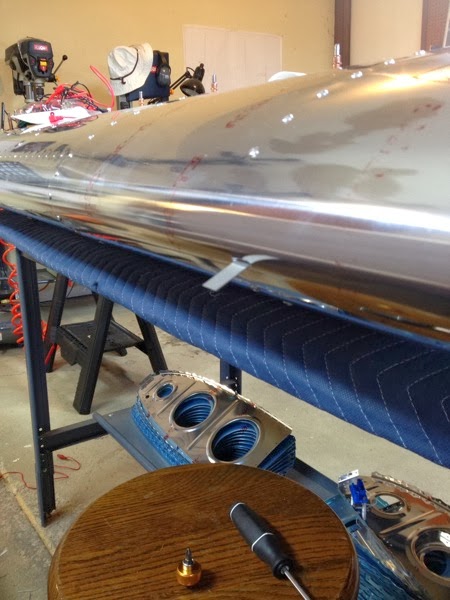 Well, that little tongue sticking out is the stall warning switch.  When the plane is flying at a very high angle of attack, the relative wind will force that switch up instead of down.  That closes a microswitch hidden beneath the leading edge, thus notifying the pilot of an impending stall.  Can you see how much that switch can move?  Not much!  In other words, I had to get the alignment of the switch assembly to be juuuuust right.

I have rearranged several of the construction steps for just this event.  In order to align the switch, I reason that the lower mid skin needs to be in final position—cleco’ed just isn’t good enough (more about that below) for this precision of alignment.  Accordingly, I only rough positioned the stall switch assembly last week and waited until I had riveted the lower skins on their lower side and the leading edge.  In other words, the skin was in final position.

I was able to reach in the access hole and move the assembly with little difficulty.  Much to my surprise, it took less than a minute to get the assembly rotated such that the stall warning vane was (1) 90° to the local curvature, and (2) audibly activated the microswitch.  I jury rigged an old analog volt-ohm-meter to the contact in the connector (this would have been nice to have thought about prior to getting all fancy and installing the connector) and verified that I could trigger the VOM with the stall warning vane.  The next hour did not go so well.

There was just no way to see the screws in order to tighten the assembly in place.  I tried a mirror; my hand blocked my own view.  I tried the solid state borescope; way too many reflections, and an oddly long focal length.  I tried mating Lada’s and my iPhones with a FaceTime (video call) connection and using one iPhone inside the wing; guess what?  Aluminum does a great job of shielding the wifi connection.  Resorting to braille and luck, I was able to get the screwdriver engaged in the appropriate screw.  The first n times, rotating the screw also rotated the assembly, thus mis-rigging the vane.  I finally got the thing tightened and—miracle of miracles—it was still in good position.

Why am I so happy that it only took an hour to tighten two screws?  Because the instructions intimated that it was “OK” to bend the arm of the microswitch itself if there wasn’t good switch action when the vane was 90° to the skin.  I really don’t know how I would have tried to accomplish that!

As mentioned above, “cleco close” isn’t good enough for some situations.  I riveted the leading edges of the skins prior to doing the above stall switch adjustment.  I recalled reading that an awl was good for recalcitrant holes that wouldn’t accept a rivet.  I had disregarded that, as I had perfect alignment with clecos.  Well, I purchased an awl and discovered that it works like a jiffy!  A touch of elbow grease provides (1) exact alignment of holes and/or (2) enlargement of the holes such that a LP4-3 is a tight fit, but not a fight to fit.  I had to #30 drill exactly 1 hole because an underlying structure did not permit the awl to go the required depth.  It’s now sitting in the honored space reserved for ‘daily use’ tools—my practice toolbox.