This was a great week! I had 3 full days off, and no travel or other time commitments.  As documented in the post about delays in the landing light, I elected to swap work projects and resume / finish the Left wing.  As you may (or may not) recall (or care),  I shelved the Left wing while pondering whether to install the Angle of Attack sensor and go EAB.  Not going to happen.  Back to work, by the book.  Well, sort of.  The book says I can modify the order of execution. 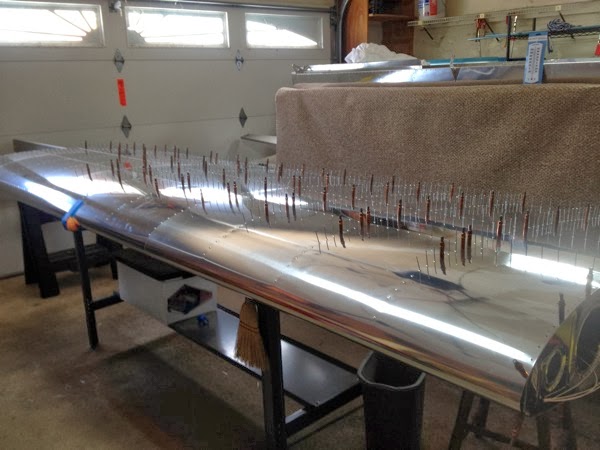 I decided to do everything ‘batch’ mode, instead of skin-by-skin.  I had already clecoed and riveted the leading edge of the inboard skin & doubler when I decided to just place all the rivets and do it all at once.  Here’s a picture halfway through the process: you can see the veritable forest of rivet mandrels standing in a background of clecos.  It’s a major pain to place the rivets because most of them require some coercion.  I’m using an awl to align the holes and slightly enlarge the hole if needed.  I think that 4 out of 5 holes need such treatment and that really makes it a drag.  Rarely, i resort to using the drill with a #30 reamer because I’ve been told that the reamer leaves less burring than a twist drill bit. 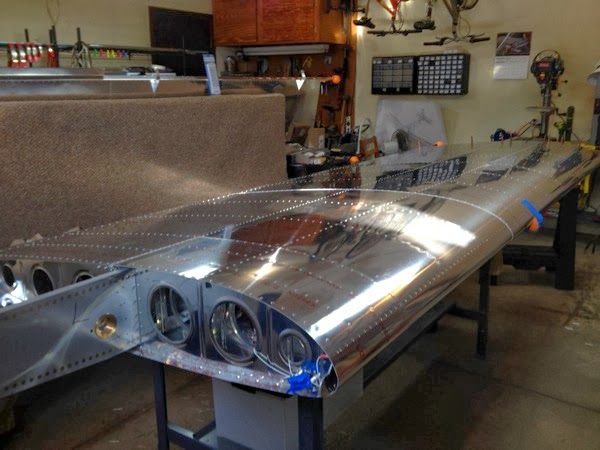 Here are all of the upper wing skins, along with the inboard doubler.  The orange & blue on the leading edge is a half-tennis ball taped on the wing to protect the stall warning switch.  On the far end, you can see the clecos for the outermost rib.