Well, it certainly felt good to make some new progress today.  I’ve been kind of dreading working on the landing light lens.  There’s a fair amount of angst regarding working with plexiglass (Lexan™) and that angst rubbed off on me.  I spent all kinds of time trying to find the right kind of drill bits. There was lots of literature saying that step drills work very well, but the instructions called out a #30 and then a #27 and I couldn’t find any numbered step bits, only fractional inches.  I reasoned that the actual diameter of the hole in the Lexan wasn’t critical, and was actually advised to be oversized to prevent thermal stress/thermal cracking due to heat & cooling effects.  I decided to use the step bit at 5/32” and had no problems drilling the holes.

Next was trimming the (very oversized) piece to something resembling the finished product.  As luck would have it, I happened to have a Dremel tool with a cutting wheel.  I’ve had that thing for years, and never had a reason for even looking at the cutting disk before.  It worked great.  I probably cut x3 as much as I needed because I did a lot of work far away from the actual cutting line as a way to get some practice and learn how to cut effectively.

I’m going to post a question to the group regarding the instructions.  As written, the lighting instructions assume that you have a complete, flying airplane and are performing a retrofit.  In that case, it’s not possible to fit the large plastic piece into the wing for rough positioning, as described in the instruction.  In my case, I kind of guessed that it would be much easier to install the light without the top skin in place.  I was right—it would have been impossible to install had I not had access from the top/rear.  My guess is that the only way to install a retrofit would be to rough trim the lens first, then place it and mark it, then trim it again to final shape/size.  Either way, I got it ready to install the next time I have time to work in the garage. 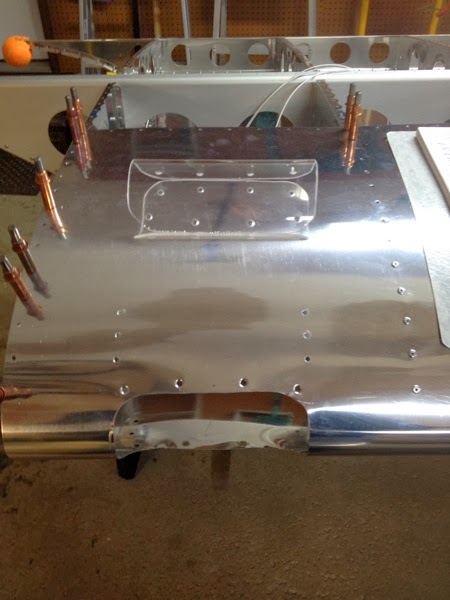 The Lexan Landing Light Lens is resting on the top of the wing, over the cutout where it will be installed.  You can see the beveled holes in the lens and the dimples in the wing.The hole is not the prettiest.  In fact, it looks hand made (which it is! :0)