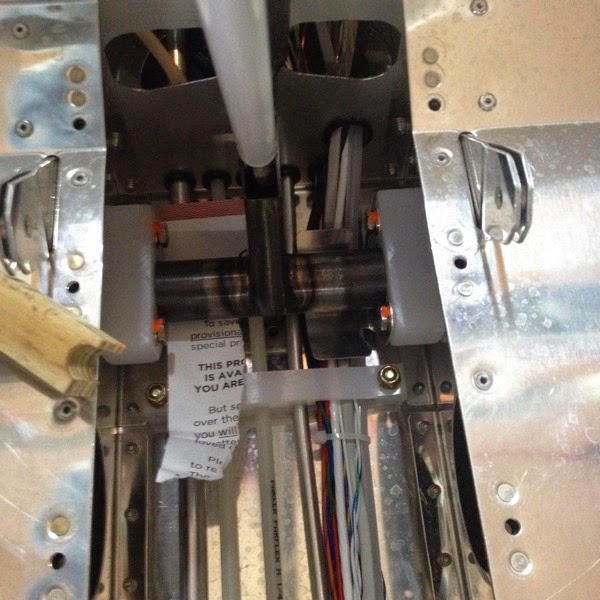 Here’s the “rest of the story” (to quote the late Paul Harvey) from an earlier mistake.  (see the entry for 4/30/14.)  I had placed some nut plates on the wrong side of the medial seat ribs.  I was able to (eventually!) drill out the rivets and place the nut plates on the correct side using the lightening holes for access and the -3 pull rivets instead of the AN426-3’s originally called out.  The only thing I couldn’t do was remove/reverse the dimple for the rivets, so the new rivets were not only not countersunk, but they actually are about .010” proud of the surface.  Today was the day that I had to deal with that discrepancy.

To my great relief, I deduced that the pieces that were going to go against those surfaces were the nylon retention/pivot blocks for the flap handle assembly.  Nylon is a much more forgiving material than steel or even aluminum! I did have to grind the short (pivoting) tube of the flap handle to get the handle assembly (handle and two nylon blocks) to fit in between the seat ribs, but it’s a nice tight fit and has no slop or wobble.  I did have to swear a bit to get the nylon block to get over the lip of the elevated rivet, but once that was accomplished it went easily from there.

The Book calls for me to able to put a piece of paper between the pivoting tube and the fuel line.  It cryptically states that it’s allowable “bend the fuel line slightly.”  VAF made an old cryptic reference to a wooden tool, but the link was dead so I don’t know what kind of tool they were discussing. No matter—I had been given the clue I needed.  I drilled a 5/8” hole in a piece of plywood and then cut right through the hole.  That then went over the fuel line and was gently wrapped with a  dead-blow hammer to put a slight bend in the fuel line to allow it to clear the flap handle.  The above picture shows the paper slid between the fuel line and the tube to demonstrate no interference.  You can also see the business end of the wooden tool described above. 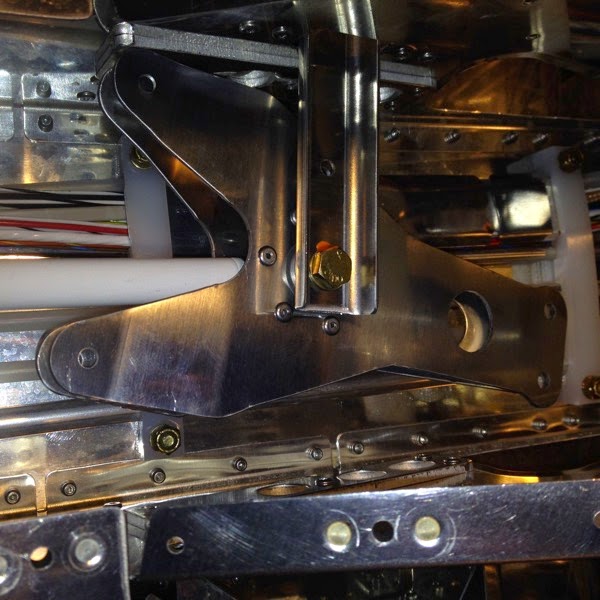 No drama here.  The (correctly oriented) mixer arms accepted the mixer bell crank and flap pushrod without any difficulty.  Note the drop of orange lacquer denoting a torque wrench was used to correctly set the final torque. (In other words, that I hope to never disassemble this again! :-)