Big Day!  Finally got the electronics on-line and the engine started!

After meeting with Brent (EAA Tech Counselor), my next expert resource is Shane, the A&P who owns/operates the shop at KDLZ.  He’s pretty comfortable with Rotax engines and is listed as a Rotax Mechanic by their website.  I’ve known Shane for about 8 years and called him up for a favor of looking everything over before I put my engine to the test. I had to work fast to get things ready for his arrival, since our mutual schedules didn’t work out that well and we only had one day in April that worked for both of us.  (That came to bite me later, as I found out that I wasn’t as ready as I thought I was.)  Anyway,  he was game and spent a Saturday afternoon with me.  Like Brent, he was pretty pleased with what he saw.  I learned a bunch of little tips that were really one of the reasons I invited him over.  After we were done inspecting everything, it was time to try to get to work. Unfortunately, it didn’t work out that particular day.  (Bummer for Shane.) 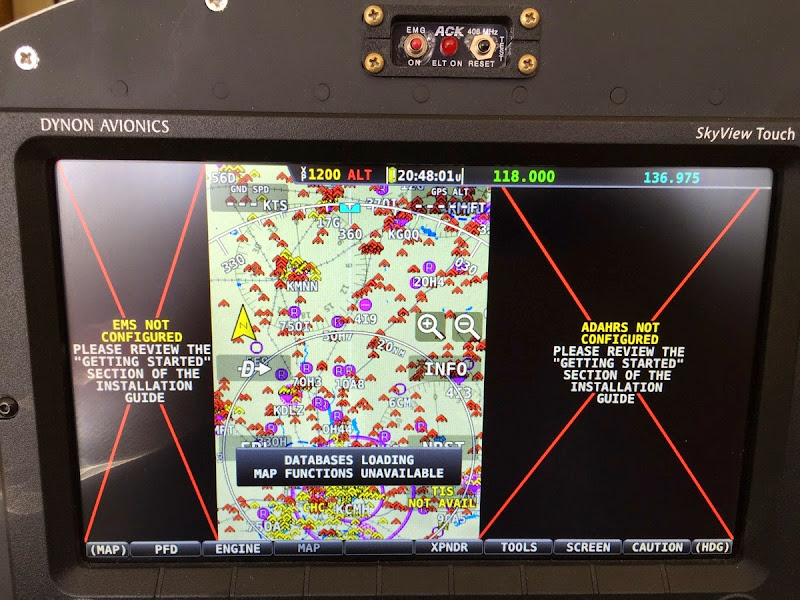 The picture above shows the Skyview computer powered up for the first time.  The center panel is OK and correctly identifies our location (GPS is working).  The right panel is X’ed out because the ADAHRS isn’t even attached (it’s in the tail cone.)  The unpleasant surprise is the left panel, which is supposed to be showing me the engine gauges.  The help message isn’t particularly helpful at this stage: ‘Please review the “Getting Started” section of the installation guide.”    Shane & I reluctantly decided to quit here since there was no way I was going to start the engine w/o some gauges.

That night, I finally found the page I needed in the installation guide and was able to do the configuration needed to get the electronics to recognize each other. 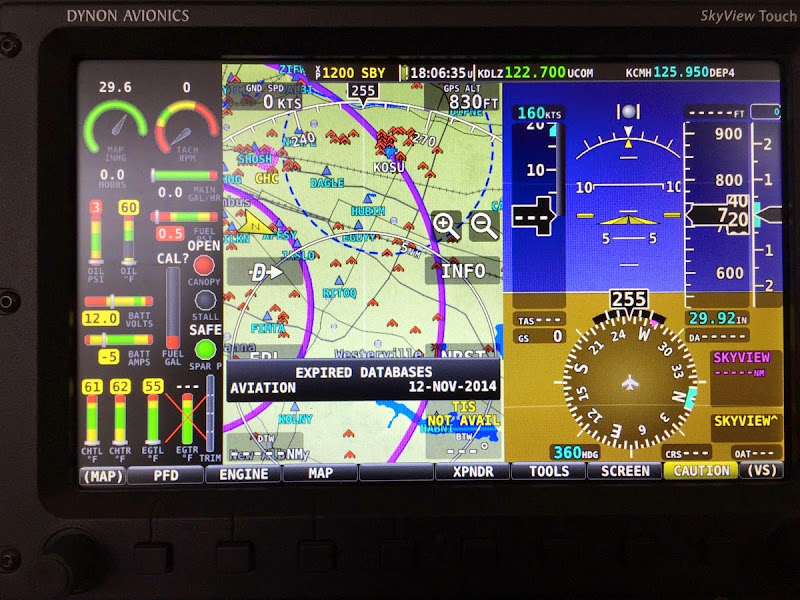 This is a much nicer thing to see.  The engine monitor is on the left and shows what you would expect for a non-running engine.  (I found the loose wire for the R EGT.)

The next step was to get the engine oiled properly.  I tried hand turning the prop as suggested by Shane and even did a no-plug quick spin of the engine with the starter, but no pressure.  Back to the books.  The Rotax manual is even less inviting and readable than the Skyview.  I eventually found the page that directed me to remove the engine-to-tank hose and pressurize the oil reservoir while hand turning the prop until oil pressure registered.  Stacey held fingers on the appropriate outlets, Nick watched the oil pressure gauge and I hand turned the prop, but no joy.  The next day I found an oil puddle under the radiator.  Initially, that was bad news.  Then I thought about it and realized that it meant I had been successful in getting oil through the system.  I tightened up the errant connection.

I brought the plane out into the driveway and facing into the cul-de-sac.  One quick spin w/o plugs and oil pressure promptly climbed to about 45 psi.  Now we’re cookin’!   Spark plugs got installed and I tried to start it 3 times before realizing that this isn’t a Cessna.  In every other plane I’ve flown, the key switch is designed so that you have both mags enabled before you can get to the Start position.  Not so here.  I ground the starter 3 times before I realized that I hadn’t turned on the Ignition A and Ignition B switches.  (Note to self:  use your checklists!).

With that little bit of understanding, I made one more attempt at starting and....  Viola!   As you can see on the link, the engine started immediately and ran great.  I ran it a total of 3 min or so.  EGT’s, then oil, then CHT’s started to register as I played with throttle & choke a bit.  As an experiment, I pulled the emergency fuel cutoff valve in the cockpit and I think it took about 45 sec for the fuel pressure to fall to critical and the engine to start running rough, at which point I cut it off with the ignition switches.   There was a little roughness at ~3000 RPM, and I expect that that will smooth out when I do the carb synchronization procedure.  For now, I couldn’t be happier.