OK, this page says that it’s about starting the wiring process, but it’s really a page where I can bitch about the fuel system.  This was pretty easy page that didn’t involve anything in the tunnel or along the floor, where all the fuel lines are.  You know: the damn fuel lines that aren’t working yet.  Anyway, here’s the progress: 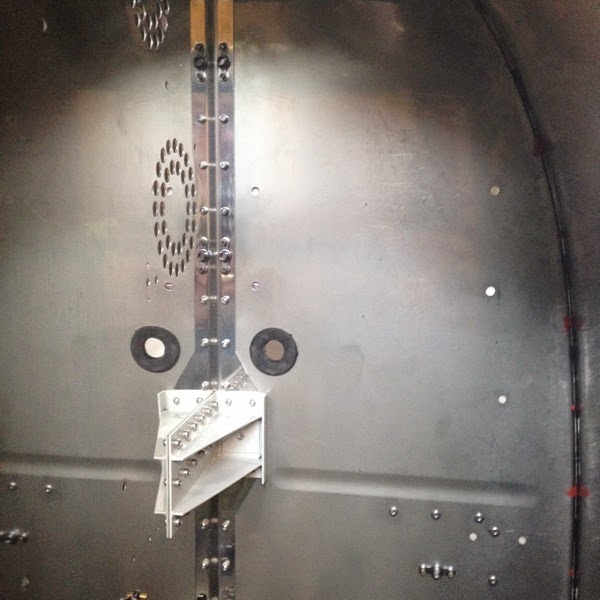 This is the modified grommet placed in the fire wall.  That’s pretty much it for this page.  OK, back to the bitching.

I’m very determined to get the fuel system working before I add more complexity to the tunnel.  I rebuilt the fuel lines forward of the cutoff valve.  These look much better, as they should since I used up 6’ of pipe trying to get them to look right.  One of the other bits of brilliance I had during the last few weeks was that I may not have put enough gas in the tank to get a good suction from the pump.  This time I added about 2 gallons to the tank.  I actually saw the mechanical gage show a measurable amount.  All looked good.  Power applied to pump and... ...nothing.  Disassembly one step at a time showed fuel just barely dribbling over the upper surface of the fuel outlet on the gascolator.  This looks suspiciously like the same level of fuel in the tank, but I wasn’t thinking well enough to do some tilt testing to verify that assumption.

After a night of wracking my brain to figure out how to drain the tank, I tried tilting the whole ship up as much as I could (about 10-11°) to try to unport the fuel pickup.  I still ended up taking a gasoline shower when I removed the pickup.  damn.  I removed the line from the tank to the pump. I removed the pump.  Both blew fine.  I blew the main line from the gascolator (through the forward tunnel line, the fuel flow meter, the interconnect line to the cutoff valve, the cut off valve itself, and the line from the pump to valve) and made another mess as I ejected fuel out of line that attaches to the fuel pump.  In other words, I’ve removed or blown the entire system. The only conclusion that I can reach at this point is a defective fuel pump.

I ordered it the day I left on vacation and it should be back when I return.  I happen to be posting this from a hotel in Toronto, ON where my wife & son are enjoying a marvelous vacation.  More to follow...