I’m getting very close to attaching the tail cone, so now we’re taking care of final details that need to be done prior to attachment.  The fuel tank has been largely a non-issue since I purchased it as a complete unit rather than building it up from scratch.  (That’s because I was trying to avoid using fuel sealant as much as possible.  (I’m over that: If I do another RV-12, I’ll build my own tank.)

Why Van’s didn’t choose flexible line, I’ll never know.  I find bending tubing to be very challenging in execution despite being simple in theory.  The photo shows the two portions of the fuel tank vent line.    Looking through the hole for the filler port, you can see the proximal portion coming off the tank and penetrating the bulkhead.  Aft of that, you can see the distal portion diving down on its way to the ventral surface.  I didn’t actually connect the distal portion, as it has to penetrate the not-yet-connected tail cone.  I didn’t photograph a little tool I made to emulate the penetration hole which helped me with alignment.  I simply used the template that directed me where to drill the exit hole and mocked up a 3x3” piece of aluminum from scrap, and attached that to the fuselage.  That gave me a mechanical / visual reference to use when I bent up the tubing.  After the tail cone is attached, it should be a simple matter to put the vent line into an Adell clamp and make the final insertion into the T-fitting, then just connect the anti-siphon air line to the ventral static point rivet (already installed.) 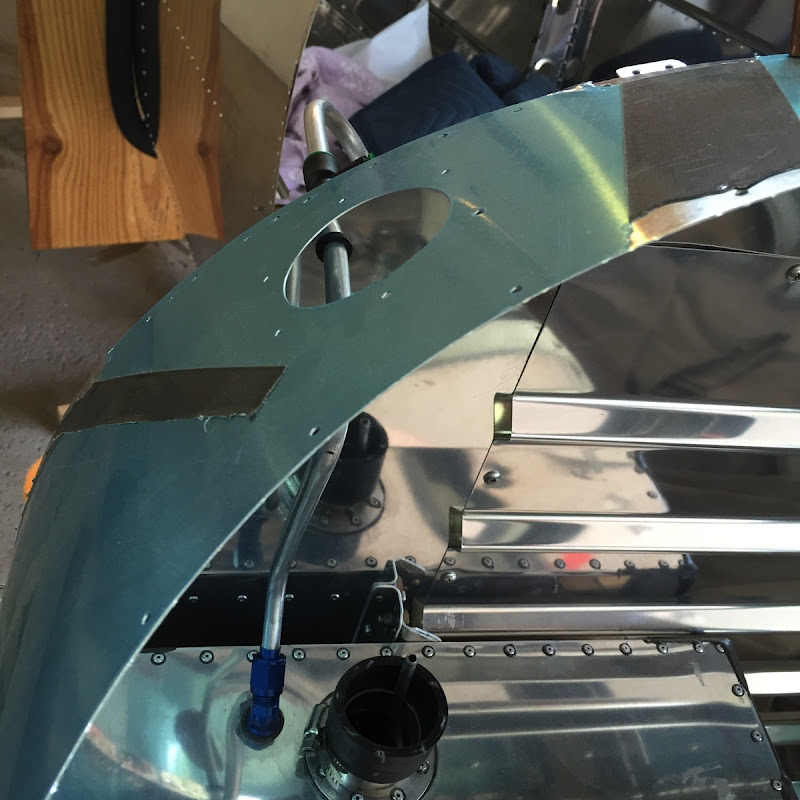