By the way, I forgot to mention last posting that it was very convenient working on the wings while they just sat in their cradle.  I had been mentally preparing to re-organize the garage and temporarily put the wings on a table.  When I looked at things, it turned out that they were ideally situated to work on.  Nice!    The same good luck held for the wing tip lighting project.

Now, this is a project that I’ve been dreading for over a year.  I was simply not able to face dealing with the fiberglass and epoxy stuff involved.  I had read the instructions multiple times, but it never made any sense to me.  Now, after doing the cowling, it’s much less confusing.  Onward! 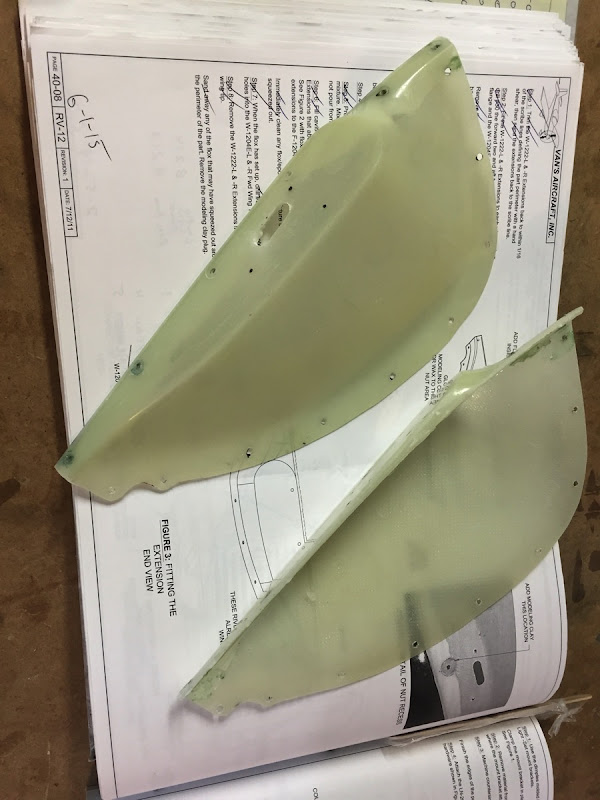 The fiberglass was trimmed to the appropriate line, holes were drilled, access ports were opened, and wax generously applied to the wing tips.  Epoxy got mixed up and sloshed inside the fiberglass edges then the whole thing was clecoed to the wing tip.  I didn’t quite get a complete fill on one edge and will probably do a re-work by mixing up more epoxy/flox and injecting it into the gap, but it’s definitely usable in it’s current state.  (The rework will probably happen when I tackle the very last project—wet layup of the canopy fairing.)