Well, that was a fun learning experience.  I believe I drilled out about 150 rivets in order to extract the wrong nut plates.  (In case you weren't reading prior posts, I assumed that a K1000-3 was smaller than a K1000-06.  Silly me.)

Per advice from VAF, I punched out the remnant mandrel from the LP4-3s.  I used 1 penny nails and a cleco plier to push the 'pit' out for most of them as I was afraid to swing a hammer in the general direction of my work pieces.  There were several that did require a long punch (actually the mandrels from previous rivets) and a steady hand and good faith that I wasn't going to bash my stabilizer, but good results were to be found.  After that, a #30 drill wielded with a precession motion was most effective in twisting off the top of the rivet.  A pair of old diagonal cutters to pull off the tail did a nice job.   The flat rivets required drilling out and I didn't do too badly with those either.  I used a #52 to make a pilot hole, then popped the head with a #40, again using a precession motion of the entire drill.

The most satisfying part of the whole thing was putting the errant nut plates into their correctly labeled bin for later use.

Re-assembly went well, as it would be expected, since I had the practice.  Hinge hardware was bolted and tie-wrapped into place as specified.  I also removed the nose piece and tweaked some of its edges so they would sit tighter against the main skin. 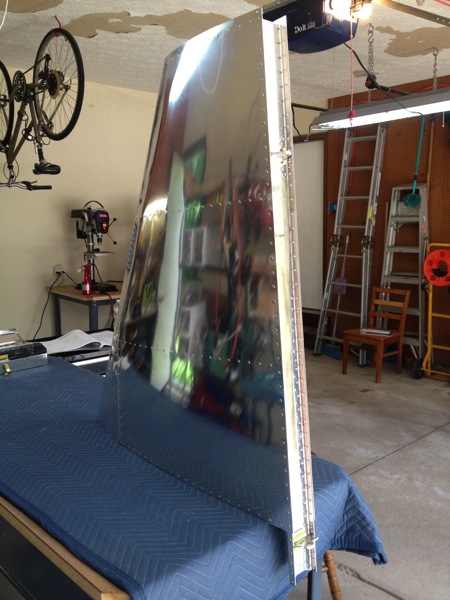