I see that it's time to do some documentation.   Today's entry celebrates the completion of the skeleton of the Horiz Stab, although we did a bit more than that.  Below, in picture 0040, we see Nick (my stepson) on the far left, with two of his friends.  They came over for a day of playing around and ended up in the shop.  I riveted the ribs while the 3 boys peeled off the blue plastic from the R skin.  They did a great job, with minimal supervision from me.  It took all four of us (well, probably could have done it with just 2, but everyone got to help) place the ribs inside the skin in a nice, controlled manner.  It didn't take too much finessing to get the forward ribs and then the aft ribs to line up.   They were a bit confused at first, but then quickly caught on.

Nick was ecstatic to be the 'guy in the know' when we ran into our first too-tight-to-fit rivet.  He fiddled with it, then I fiddled with it, then just said "Nick, #30 drill".  He lit up a smile, got out the drill bit, chucked it up and (with an "OK" nod from me) touched up the recalcitrant hole and popped in the rivet.  His buddies were duly impressed that he knew how to use a power tool. 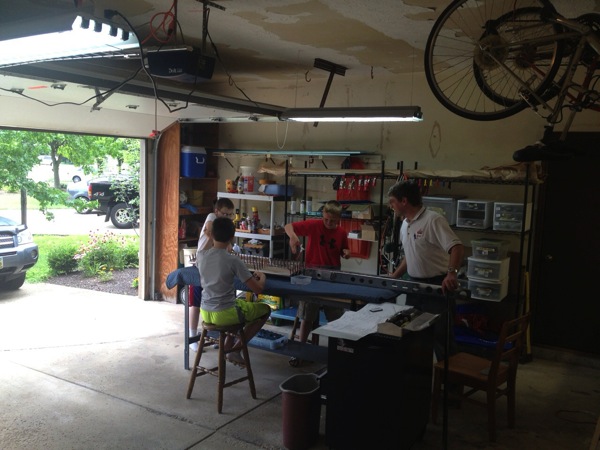 Here are the boys, happy with their work for the day.  Nick Starling (mine), Nick A and Brandon. 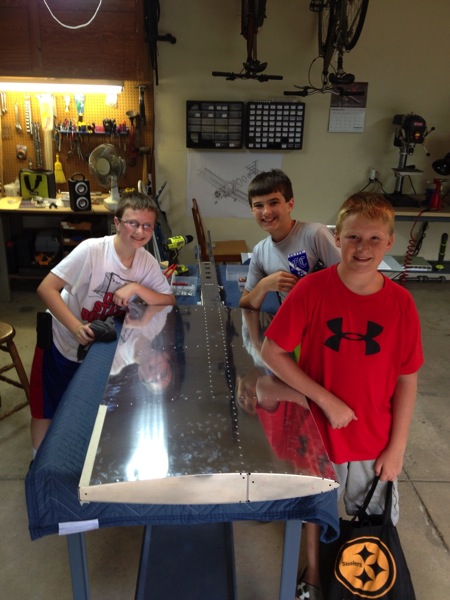 And finally, proof that I have completed step 09-06. 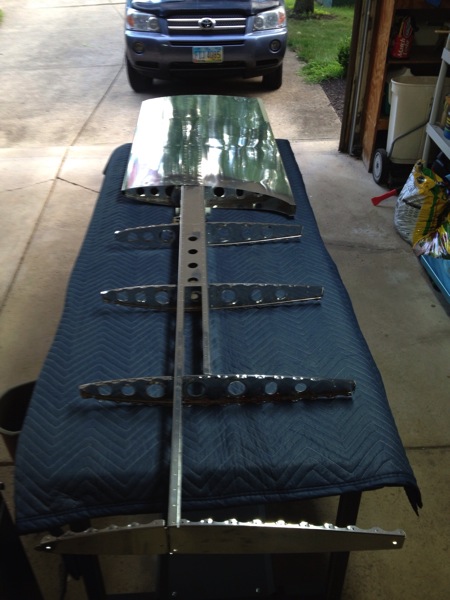 Before we bid adieu to this topic, I will discuss one other issue.  The previous post discussed the difficulty getting the R hinge brackets to be square.  I decided to read ahead and find the part that fits in the hinge brackets and do a test fit.  In the process, I discovered that the hinge holes in the hinge brackets were too small to accept the AN4 bolts and they needed to be final drilled w a 0.25".  That involved removing the outer hinge brackets.  I was able to drill the inner hinge brackets with the outer ones removed.  I debated drilling out the riveted nut plates, but decided to use a bit more finesse.  I drilled the aluminum bracket just down to the nut plate using the drill press.  The first one went flawlessly and I tested it with an AN4.  The second one got spun out of my hands when I put just  a touch too much pressure and the drill bit into the steel of the nut plate.  There was a single shaving of damage which I cleared away.  It too accepted an AN4 from both directions, so I re-inserted the hinge flanges and buttoned everything up.  I ended up having to loosen the hinge bracket yet again to rivet the R inboard forward rib because the drawing specified that the open side of the flanges face the hinge spar.  (Why couldn't it be the other way?  That would have left plenty of room to get the riveter in place!  I didn't see what would happen if I installed it backwards…)   I have ordered a 1/4" drive extension in order to get the torque wrench in there to make sure that I'm correctly torqued.    I decided to bend the L forward inboard rib just enough to rivet it into place.  I hate bending aluminum, but decided that Van's knew what they were doing when the called out the directions in that order.