I spent 2 days working on project #2, a section of airfoil provided by Van's as a training project.  Nick spent some time with me in the shop, but he's not quite as fanatic about this as I am. :0)     I think I put about 10-12 hours total into this, much of which was the 'now what do I do to fix that?' mode.   Like the toolbox project, this required several modifications to achieve my goals of learning techniques appropriate to the RV-12.  (I think that this is an aileron section from an earlier design.)   The plans call out for driving rivets in awkward locations, including spaces that are too tight and some that are too far from an edge to use a squeezer.  It also called out double flush rivets for the trailing edge and for me to roll the leading edges.

The plans (1 sheet) reminded me to go back and re-read sections from Chap 5 to get details on those little details, but my version (RV-12) has had Chap 5 conveniently revised to state "these techniques are not applicable for the RV-12".  In other words, I was on my own.

All in all, it's not bad.  There are several rivets that I would drill out and replace, but the kit did not have any spares of the type of pop-rivet used in the leading edge.  The double flush rivets on the trailing edge were tricky, but that's exactly why I went ahead and worked on them anyway; they don't look terribly pretty, but they are flush to the feel.  I was pleased with the fact that I came up with a way of using a squeezer; I took a 1" section of AEX-Wedge from the kit and taped backwards it over the tail of the rivet; the sandwich of sheet-wedge-sheet-reversed wedge made a parallel surface for the squeezer to work with.  Not too bad for a kludge job.  The other major 'huh, what do I do now" moment was dealing with the rivets at the trailing edges of the ribs:  no way to get a squeezer in there, so I used LP4-3 pop rivets instead.  Well, I did on one side.  The 1st rivet prevented the 2nd from fitting in until I spent many noisy minutes with a Dremel tool to cut down the 1st pulled rivet in order to make room for the 2nd. (N.B., Not an acceptable technique for a flying bird; strictly for demo work only.)

update 12/27/13:   I have since learned that the technique to deal with the inadequate clearance is to pull the 1st rivet normally, insert the opposite rivet and apply inward pressure as you slowly pull the stem.  The second rivet shortens enough to clear #1 and then sets normally. 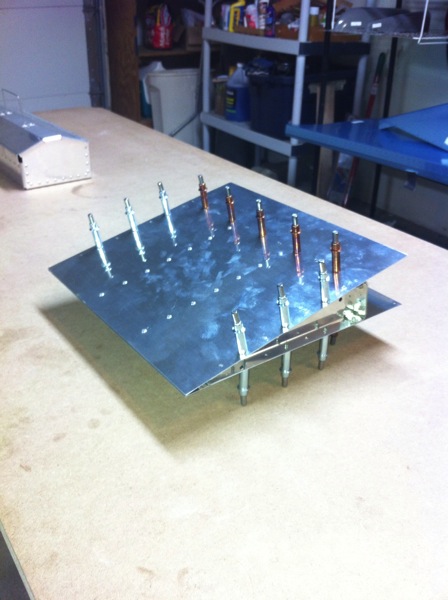 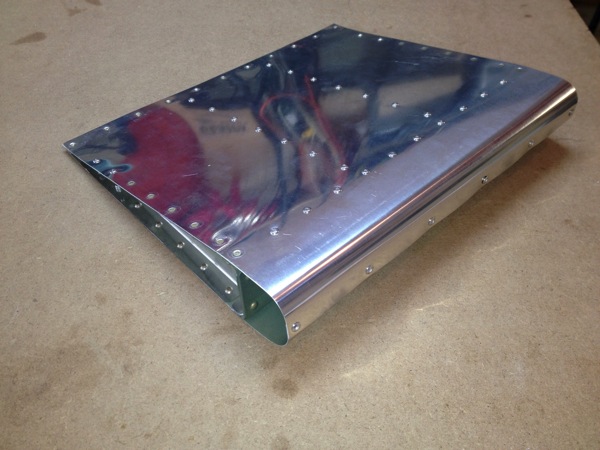