Well, it looks like I can’t count.  At least it looks like I can’t follow linear directions and go from chapter 31B to 32 to 33 to 34.  I decided to skip Flight Controls (32) and Miscellanea (33) and get started on the Canopy.  I won’t be able to do the rudder and elevator controls because there’s no tail cone to attach things to, so Flight Controls would only be a half-chapter anyway.  Miscellanea can be deferred as there don’t seem to be any strong dependancies.

On the other hand, there are multiple comments from Van’s and VAF that canopies should not be manipulated when they are cold, so I want to get it taken care of in September while it’s still warm.  Plus, there’s the very real realization that I’m afraid to work on the canopy and so I want to tackle it first and get it out of my system.

BTW, speaking of fearful projects, I re-filled the fuel tank and ran it for a while.  While I did get the expected leaks around the gascolator-to-return line (because I deliberately ignored the sealant), I didn’t see any perceptible leaks from the F-1204 fuel return line union, so I’m holding off on that project for a while as a “not required”.

Anyway, on to the fun! 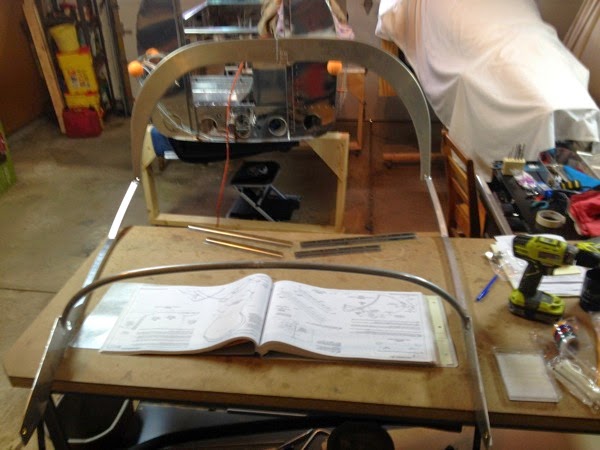 As usual, the first pages of a chapter are concerned with preparation of parts.  The front bow has been sanded flat, some angles have been drilled and (not shown) the gas struts were final drilled.