I actually got a lot done in 2 working days.  Probably one of the more physically demanding tasks was accomplished with the help of my son, Nick.  I thought I’d need the assistance of my future son-in-law, Nick, but Nick stepped up to the plate and did a great job of manipulating nuts, bolts and washers on the top of the main structure while I worked underneath and supported the gear legs and played with my own collection of nuts & bolts (not to mention the greased retaining plates!)

After we got both gear legs attached and snugged, I decided to do a bit extra.  The gear retaining hardware and wear plates were greased as per The Book.  I noted that most of the bolts had grease on them by the time they were laboriously fit through all of the hardware and I just have a bad feeling about putting lubricants on devices that are designed to hold together by friction.  Much to Nick’s dismay, we removed each & every nut & bolt (except for the AN6’s that were recalcitrant) and cleaned off all of the grease with some isopropyl alcohol.  (The AN6’s were cleaned in situ.)

I then had the opportunity to use my brand new “big” torque wrench.  The one that was recommended for the kit was not capable of reaching the specified torques for the AN6 hardware.  I made an estimate of the prevailing torque for the nuts, for the rotation of the bolt and ended up using a final torque of 20 ft-lbs. 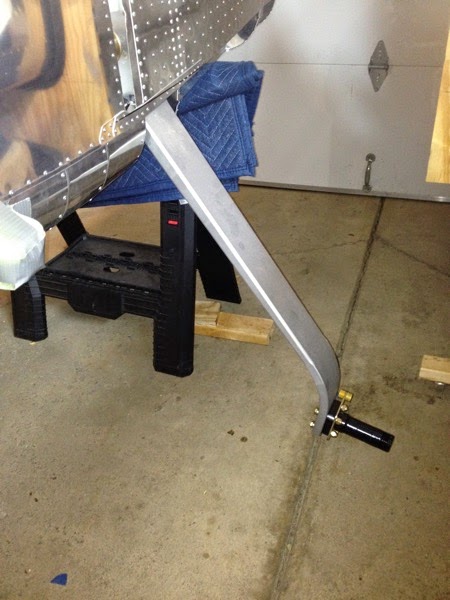 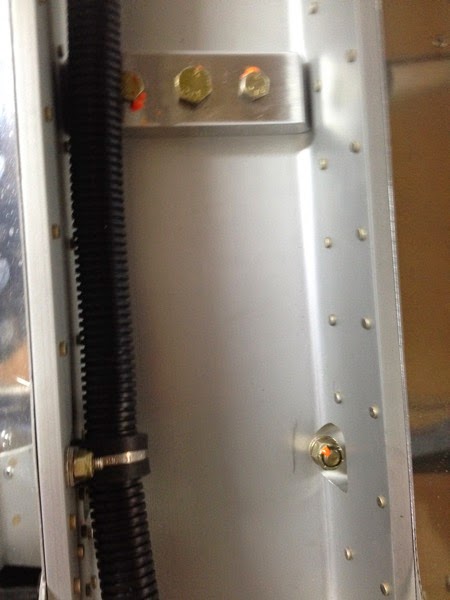 A sharp eye may have noticed that the axles are already installed on the main gear legs, which isn’t actually called out for until the next page.  I tried to read pages coming up and stay ahead of the book, so to speak.  I was moderately successful in this case.  I elected to install the main axles and do the toe-in/toe-out check prior to torquing the main gear attachments.  My intention was that if there was a slight mis-alignment, there may be some room to “settle” things before tightening up. Much to my surprise, the axles are well aligned and do not require any “settling” or any shims to be added!  (I even looked at pre-purchasing a 1° and 0.5° shim just to have in my shop because I hate getting close to finishing a page, only to have to defer.  I discovered that the shims are about $20-30 each!  Not going to buy ‘em unless I need ‘em!)

The picture of the attachments shows the lacquer I use to visually assure myself that I used a torque wrench to set things.  The other nut is not visible due to the wiring conduit.  That had to be removed and replaced in order to finish this page.