Despite the 1st instruction stating to remove the Top Skin assembly (to open up the avionics bay) I think I’ve gotten through the toughest part of the installation without having to do so.  I was able to snake the Firewall Forward Harness through the firewall penetration by taking all of the wires (except for the yellow wire to the regulator) and laying them into a length of painter’s tape and rolling up the tape to make a “smooth” shape to thread through the avionics bay wiring nest and out the firewall penetration.  I learned from previous attempts at this trick.  There are 3 connectors with bulky shapes that all terminate at the same length.  I staggered them in the tape trough and let the slack wire be at the proximal end, then later tightened them up.

The power wiring harness has a very bulky (heavy gauge) wire that is actually bifurcated on its way to the regulator, and that needed to go through the inferior snap bushing below the avionics shelf (new location of regulator.) That was a pain to pass through the tightly packed snap bushing and I needed to remove the pitot line, pass the power regulator wires, and re-insert the pitot line.

The instructions also imply that the pitot line (Aft Pitot Line to Pitot Line) gets spliced within the avionics bay, but mine was able to be spiced forward of the firewall.  I may have a shortage at the aft end (AHARS), but if so, I’ll just add a splice back there.  It wasn’t tough to slide the lines into the splicing tube, so I added two tie wraps for additional security. 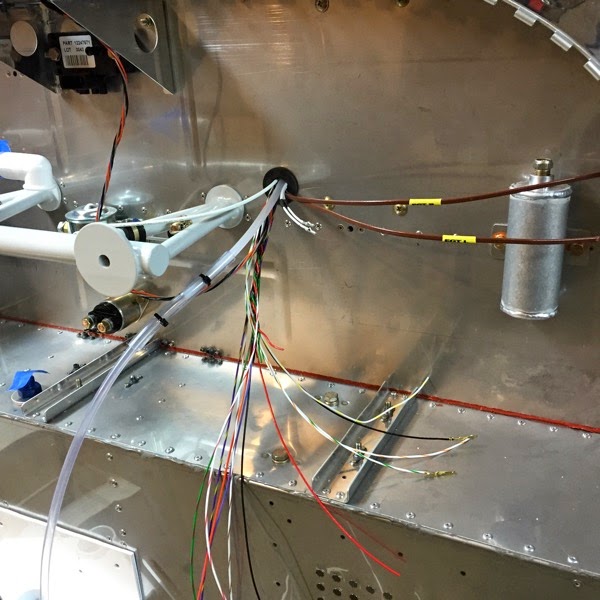