Today is the first posting that I’ve done in nearly 2 weeks.  For some reason, I had a huge period of demotivation.  I really can’t explain it, other than there’s probably a bit of fear of finishing, a reluctance to tackle re-work, reluctance to start the fiberglass, and a lot of angst about what can I do here at the house and not do at the hanger.  (Oddly enough, one of the things I don’t want to do re: moving is figure out what tools/benches to take to the hanger and which ones to leave at home.)

Anyway, I got back to working on the plane last night and I feel more like my normal self, hence I’m back to posting.

I didn’t take a picture of the shoulder harnesses, but I was fairly pleased with a method I came up with of making everything look neat.  I tightened up all of the straps and wound the loose ends into a roll and then secured them with tie wraps.  Now the cockpit looks neat and tidy, even with the upholstery not installed.

Before I put the tunnel cover in place, I finally tackled a job I’ve been putting off for a while:  I needed to reposition the brake lines from the pilot into the tunnel.  The way I had originally run them, they were bulky and wouldn’t line up vertically and thus fit through the tunnel neck.  It wasn’t as messy as I thought it would be, but it still wasn’t fun.  I drained as much fluid from the reservoir as possible before starting.  After they were removed and reposition and re-attached, I then repeated the bleeding process and got a fair amount of air out of the system.  There’s only about 2 or 3 cm of air visible in the brake line over the pilot’s feet, but the brakes feel nice & tight.

For some reason, the tunnel was a bit challenging to get all of the screws started, but I managed to not strip / destroy any nut plates. 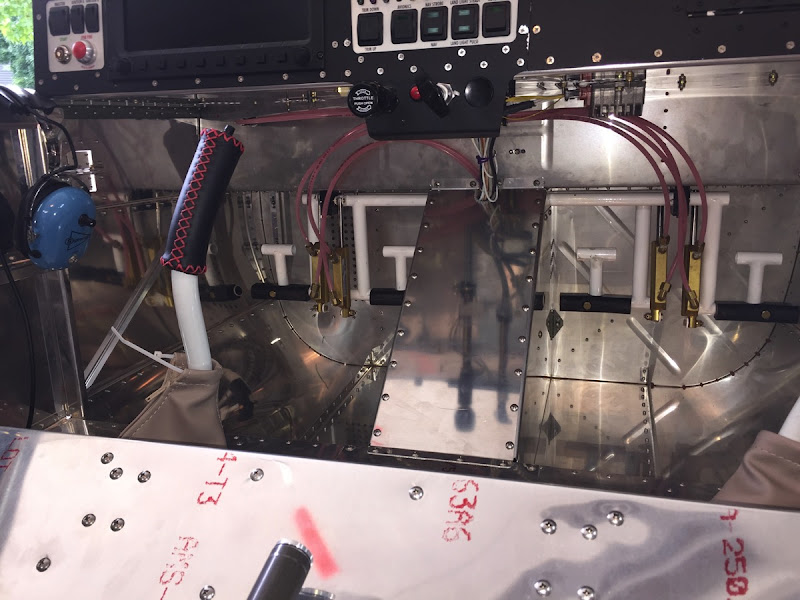