Major Progress!  I love it when there's a big, visible change in the garage.  Here's the initial assembly of the tail cone itself:  the two bottom skins clecoed to the 3 frames.  (Note the clever creation of sawhorses by putting wood across the top of the cradles.)  Nick hadn't had much interest in the project all day, but did come downstairs towards the end.  He's got a great sense of humor and joked about how his picture makes it look like he did all the work, but he knows that he's just taking the credit :-) 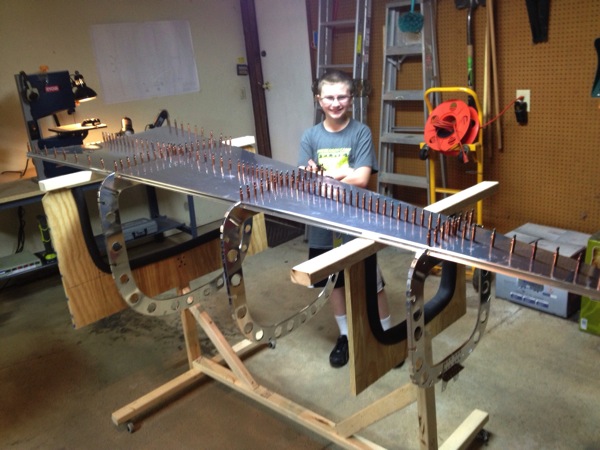 Remember how I said that I wasn't real comfortable about trying to flute the frames?  Well, I'm still not happy with them, but I'm maintaining the trust that it will all work out when we finish up the skins.  When you look at the frames from the edge, they resemble potato chips more than flat disks... 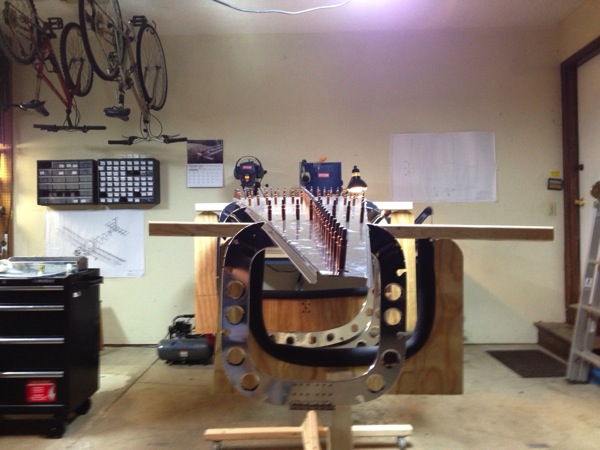 Not all was well in Camelot.  Here are two perfectly formed cleated rivets.  The Book called out 270AD4-4's, which I know I placed properly, only to find that they had cleated.  My analysis is that the -4 is too long, but that there aren't any 270AD4-3's.  I ground down some -4's to about -3's and they installed very nicely on the other side.  I tried to take a picture of the modified rivets, but failed to note that they had rolled to the wrong orientation to show of their new, svelte appearance. I drilled out one of the cleated rivets without any problem and installed a modified rivet.  (These were checked with the rivet gage and met spec.)  The other one (as shown on the right in the photo below) did not drill out cleanly and I was left with an ugly, out of round, nasty looking hole.  Consulting The Book, the remedy called out is to drill with the next size up and use a larger rivet.  I don't have any AN27-5's, but had purchased a spare rivet puller with an assortment of pop rivets, including some 5/32's, for just such an occasion.  One of those was installed as you see here. 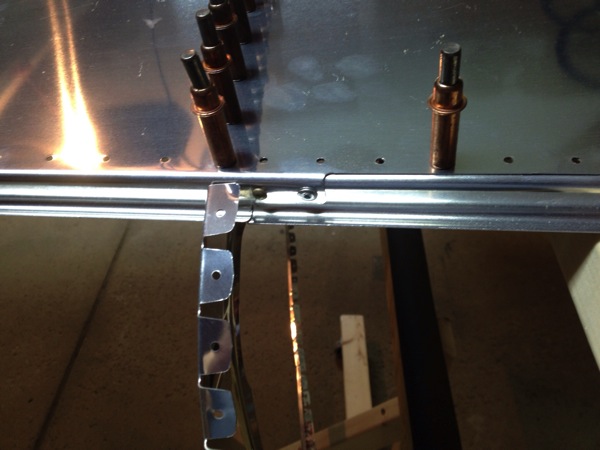