This posting isn't one of the regular "page completed" posts, but I haven't had much time to work on the plane, and this page (10-04) takes a long time.  (It has lots and lots of hand-squeezed rivets.) You can see the previously completed frames hanging on a clamp in the background.  On the table are my tools currently in use when I had to stop and get my afternoon nap before working tonight's shift.    You can see the aft bulkhead being held upright with a table top vice.  The blue painter's tape is holding wood blocks onto the bulkhead so I could clamp it in the vice.  I decided to start with the "easy" rivets, and did all of the pull rivets first.  I did two of the (limited quantity) LP4-4's before I realized that the attach bracket was supposed to be placed first, so I had to drill out two of those.  Hopefully, Van's gave me a few extras, or sometime in the future I'm going to be 2 LP4-4's short.  There was a 270AD rivet that was too far from the edge to get a good seat with the squeezer.  I ended up with a smiley, so I drilled it out and tried again, but I just couldn't get a good seat.  I had read that there is a place in the fuselage where Van's actually calls out using flat dies on a 270 rivet due to spacing and that it is a permissible technique, so that's what I did.  Anyway, it was 2:00 in the afternoon when I had to call it quits and take my nap before work.  I hope to finish up the page on Saturday the 17th. 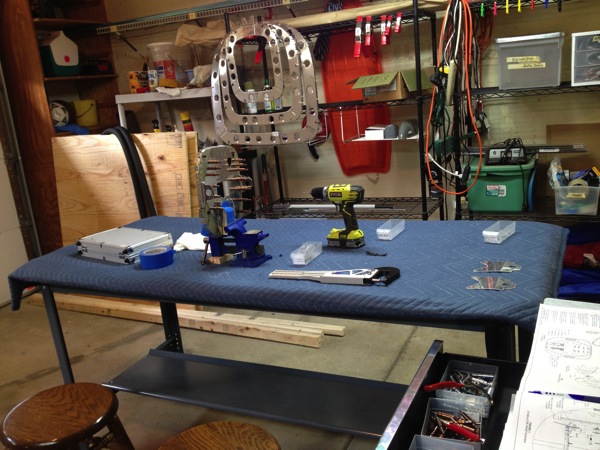