I still don’t have the ProSeal that I ordered last week, so I can’t attach the firewall shelf to the lower firewall (e.g., step #4).  I decided to cleco it in place for now and proceed with assembly.  I’ve decided to defer installation of the side skins until after I’ve installed various subsystems (brakes, brake lines, fuel system and wiring harness) based on several posts from VAF.  One poster actually took advantage of not installing the fire wall shelf until after the rudder pedals were finished.  I think that makes sense, and I’ll probably do the same thing, so this really isn’t a bad thing after all. 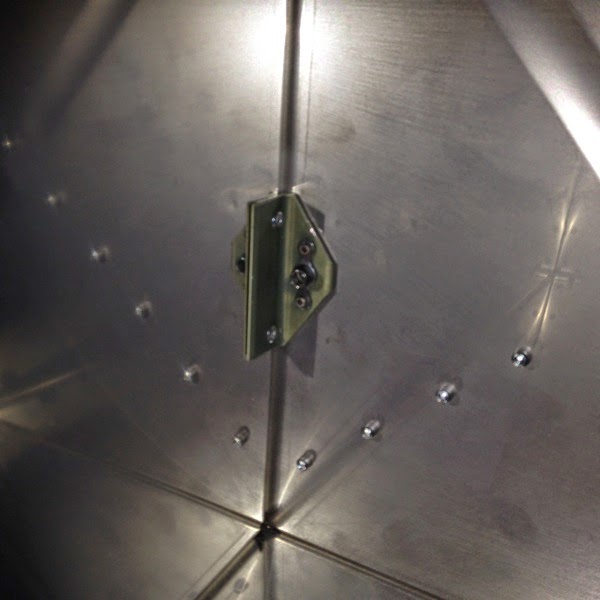 The gascolator attach bracket was pretty easy to fabricate from the aluminum stock.  I didn’t like the first one, so it got trashed and I did another, pictured above.

Repairing an “oops”.  While I was musing about what to do without the ProSeal, my eye happened to note a fairly significant faux pas.  There were a couple of nut plates on the side of the copilot’s chair.  The fact that I could see the nut plates (and they had, in fact, been in plain view since last month) suddenly hit my brain.  Damn.  They’re on the wrong side, as there’s no possible way to have a device inside the ribs to attach from that direction.  I reviewed the plans and confirmed that I had indeed installed them backwards nearly a month ago.   It took much creative work and many expletives to get things right again.  I knew that one of these days I would need an angle drill adaptor.  I looked for an 90° air drill at Harbor Freight, but didn’t find any.  I found a 90° adaptor and picked it up.  I used a #52 bit to go through the rivets and make pilot holes.  I find that using a #52, I can steer the bit even when they don’t start exactly in the center.  Unfortunately, I couldn’t get the longer #40 bit into the tight space between the seats.  I cut off the tail of a #40 and successfully drilled out the 4 rivets for the 2 nut plates.  They got fished out of the intercostal spaces and then I vacuumed up everything that i could.  I was unsuccessful and reversing the dimples despite trying to hold the female die with a heavy block and whacking the male die with a hammer.  I gave up on that phase and set the nut plates using the pulled CCR-264SS-3-2 rivets typically used where ever it’s not possible to squeeze a 426D3. They’re not pretty, but I believe they will be functional.   I don’t know what installs here yet, but will double check that the CCR-264SS is adequate for the expected loads.